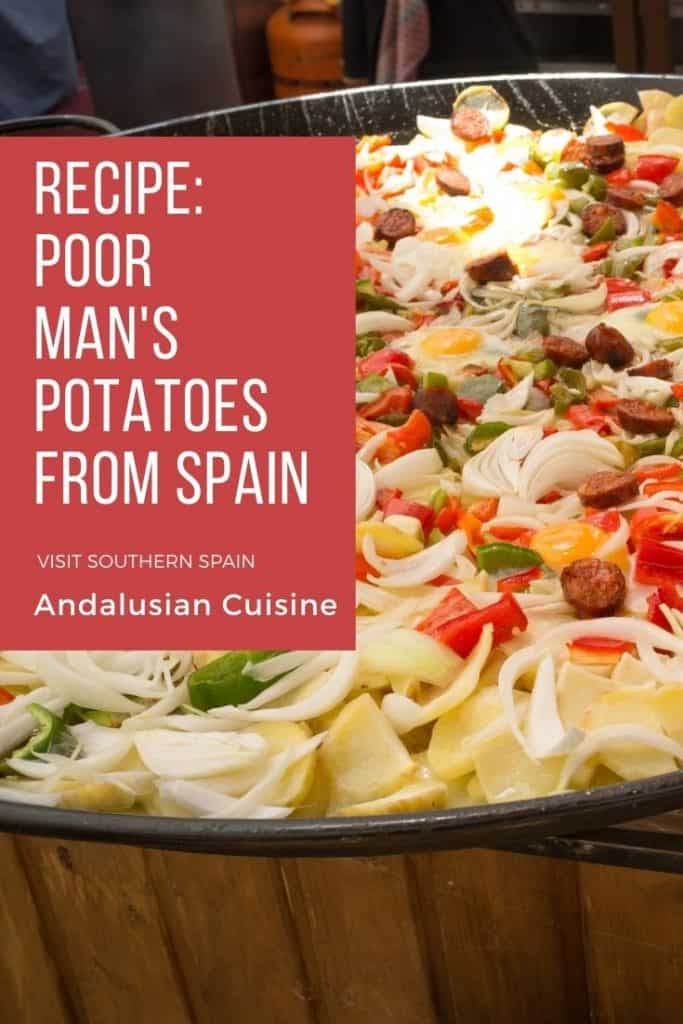 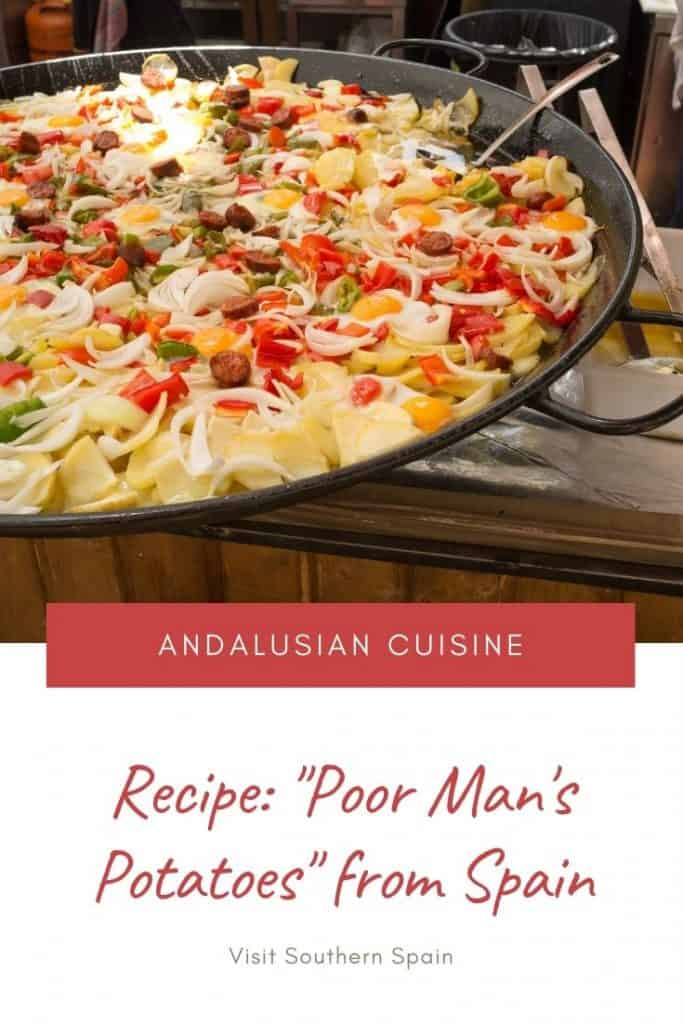 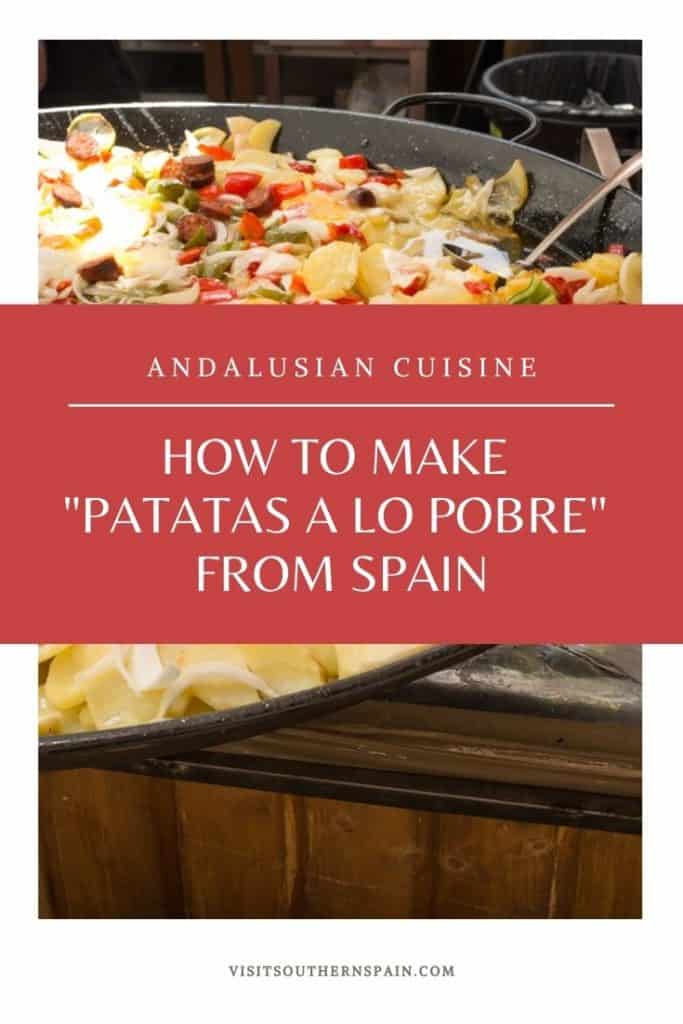 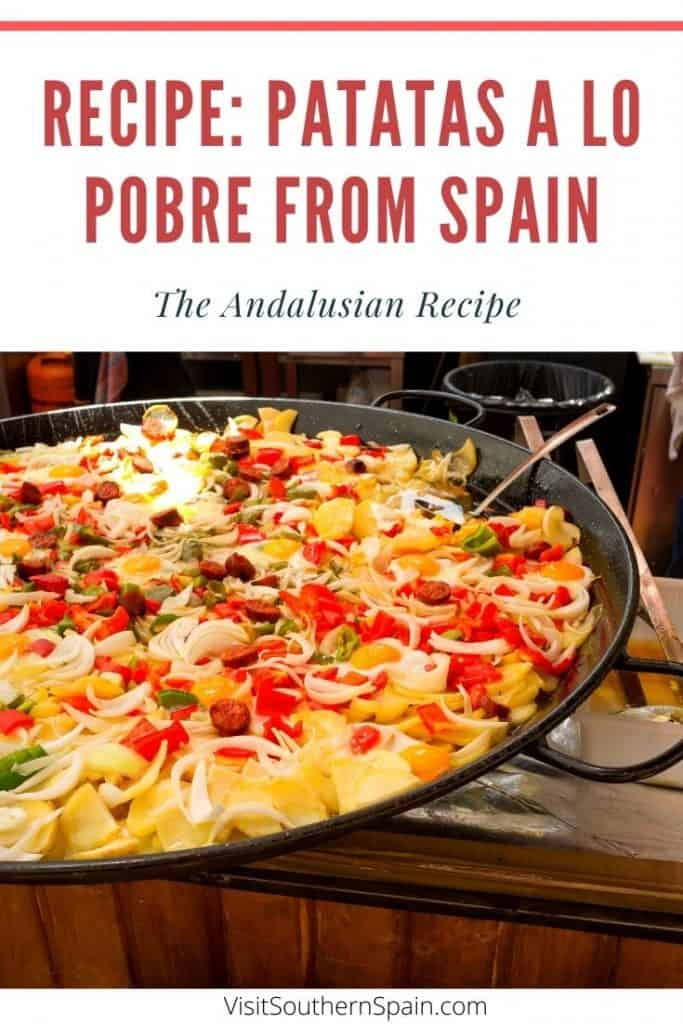 Patatas a lo Pobre which in English means poor man’s potatoes is one of the most popular Spanish dishes.

This dish has its origins in the southern region of Spain, particularly in a city called Granada.

As you can see by its name, they are called “Poor man’s potatoes” or “Poor style potatoes”, because it used to be a dish eaten only by the peasantry during famine times, mostly due to the fact that the ingredients were easy to find.

It also regained its popularity during the first and second world wars and the economic crisis of the 20th century. Nowadays it is one of the best Andalusian foods to eat, and it is eaten by everyone.

If you ever find yourself looking for what to eat in Granada, this is definitely something that you have to try!

How to make Patatas a lo Pobre

To make Patatas a lo pobre you will need the following ingredients:

There are multiple versions of this recipe. For example, some of them don’t have peppers or onions, so if you don’t like them you can remove them, even though they add a more complex flavor to the dish.

Also, some recipes include scrambled eggs, so you can scramble some eggs on a different pan and then mix them with the cooked potatoes.
Besides that, some people add more condiments to the potato, for example, paprika, turmeric, and others to get a more spicy flavor.

Other than that, you can also put some chopped parsley on top of your cooked potatoes, or even a dash (2 teaspoons) of white vinegar to add a more tangy taste to the dish.

You can also change the olive oil for another type of vegetable oil, such as sunflower, canola oil and more! But remember that the potatoes will soak a little bit of the oil, so make sure that you like its flavor because it will be transferred to the potato.

If you want to try other iconic Spanish recipes, then we encourage you to try our Tortilla de Patatas recipe or the Spanish potato salad.

This dish is commonly eaten as a side of the main course. For example, you can cook your favorite type of meat in the oven and serve it alongside the potatoes.

In Spain, the most popular way to eat it is with hake, salmon, or other types of fish, and it goes really well with this Poor man’s potatoes.

You can serve it on a large plate and let everyone grab as much as they like, or serve it on separate bowls individually.

The individual way is ideal if you are having multiple guests, this way if some of them don’t like parsley, peppers, or onions you can remove them from their dish.

For your guests, you can also serve a plate with tapas containing the Poor man’s potatoes and Spanish chicken croquettes. The plates will be empty in the blink of an eye.

Besides that, you can put the potatoes on a cooking tray with some cheese on top and on a high heat oven, grating the cheese for about 5 minutes. Even though this is not the traditional version, it is definitely delicious.

If you love hearty Spanish food, have a look at our Spanish lentil soup or our tasty Spanish garbanzo soup recipe.

Patatas a la pobre can stay in the fridge for 1 to 3 days before consuming them. You can also freeze them for one to two weeks, but the reheating process will take longer (30 minutes on a low oven).

Since this is a fast recipe, the best thing that you can do is to eat them right away, so you will get a more flavorful and fresh dish.

Besides that, freezing them is not the best idea because it is a moist dish, and this way they become drier in an unpleasant way.

If you can’t get enough of “poor man’s potatoes”, have a look at my webstory about patatas a lo pobre here.

There are multiple versions of this dish, some of them don’t use peppers, others add scrambled eggs,  so you have a lot of freedom on what to do with your potatoes!

Also, you can substitute the olive oil for any type of oil of your choice, but the olive oil works better and it really enhances every flavor of the vegetables.

What is patatas a lo pobre?

Patatas a lo pobre is a typical Spanish that can often be found in the homes and restaurants of Southern Spain. Translated as “poor men’s potatoes” it’s a hearty and tasty dish that you can easily make at home.

How to make patatas a lo pobre?

It is very easy to make patatas a lo pobre with this recipe. All you need are potatoes, peppers and onions. Ready!

I love making this dish .Simple and really great with a good steak. Peppers green long italian . onion ,garlic . I do not toast mine .

Hi Hand Peter, so happy to hear that! Feel free to share your photos on Instagram and tag us. We can’t wait to see them! 🙂