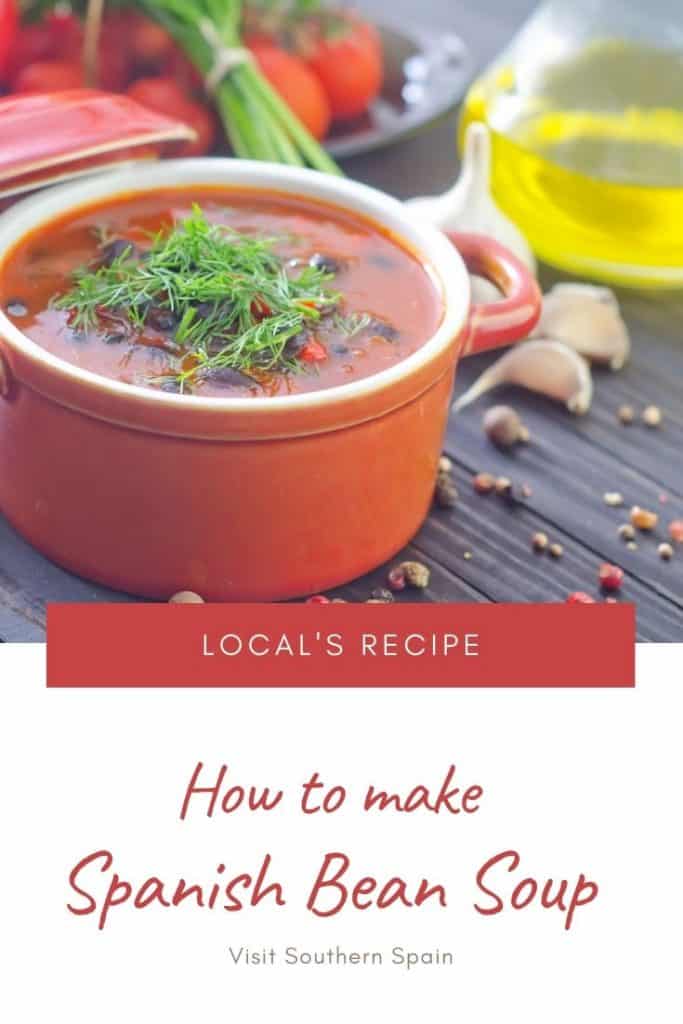 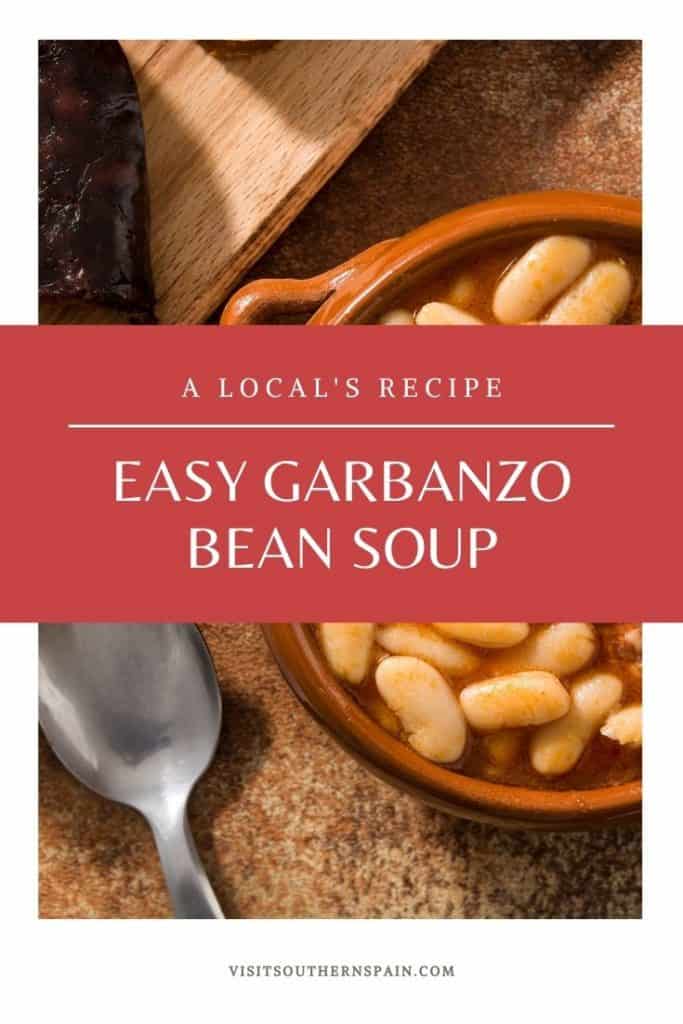 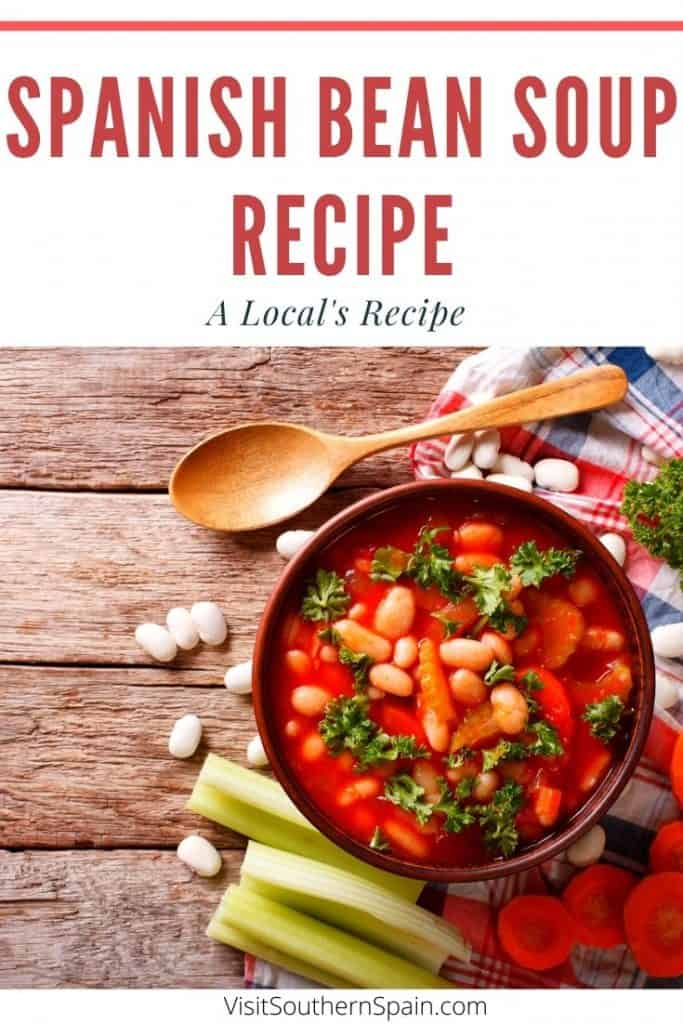 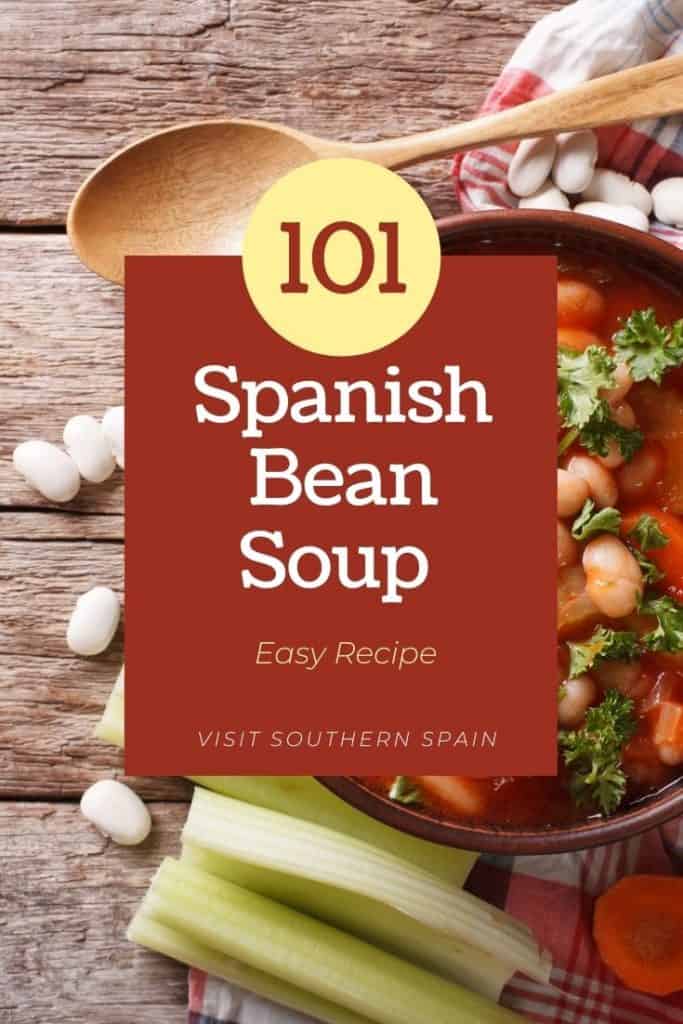 The Spanish Bean Soup, also known as Sopa de Garbanzo in Spanish, is one of the most popular soups of Spain….especially in Southern Spain in winter.

It used to be eaten only by the lower classes because the beans were cheap, but in the late 1930s during Spain Civil War the Spanish garbanzo (chickpea) soup made its way into the meals of the upper class.

This is a typical food from Andalusia, even though sometimes it is confused with the cocido madrileño (Madrid Stew).

The main difference between these dishes is that the version from Andalusia calls for different spices and chorizo, meanwhile, Madrid’s version only calls for potatoes and other sausages.

It isn’t a soup either, but rather a stew.

The principal reason for this ingredient change is that the spices were cheaper in Andalusia thanks to trading with Africa and Asia.

Besides that, there are some ingredients that might be hard to find, such as Spanish sausage, but you can substitute it with other protein.

When it comes to spices, the only one that you might have a problem finding is yellow saffron, but you can also replace it with any spice of your choice.

Vegetables are really common, such as potatoes and onions.

Remember that every ingredient in this Spanish soup recipe can be substituted, but we will get to that point later. This is the best bean soup recipe because its protein content makes it a filling dish.

Besides that, it has enough vegetables, meat, and beans to keep you warm during cold winter days. Oh yes, winters can get cold in Southern Spain!

Things you need for the Spanish Bean Soup

How to make Spanish Bean Soup – Step by Step Guide

Thankfully there are multiple garbanzo bean soup recipes, which allows you to make different versions. Indeed, there are vegan, vegetable and meat variations of the Spanish bean soup.

For example, you can easily make a vegan version, just replacing the chorizo and ham for more vegetables and the chicken stock with vegetable stock.

If you have a hard time finding chorizo or Spanish sausage in your town you can change it for smoked sausage or more ham.

You can also play with different spices according to your preference, by adding turmeric, paprika, black pepper, etc.

Besides that, if you don’t want too much salt on your dish, you can replace the chicken stock with water, even though you will get a more loose consistency. In case that you need to thicken your soup, you can add one tablespoon of flour or cornstarch.

There are other Spanish bean soup recipes, so you can also change the chickpea for white bean or any other of your choice.

There’s even a similar recipe for Spanish white bean soup, where the difference is the cooking time, and it also calls for more vegetables such as carrots and peppers.

Instead of chicken or meat stock, you can also go all natural by doing your own stock with a ham bone.

If you love hearty Spanish soups, you should have a look at our tasty Spanish lentil soup recipe or our healing Spanish garlic soup.

As it commonly happens with soup in Spain, it is eaten as a main course for lunch or dinner. It is a classic dish for the cold winter days, even though you can enjoy it any time of the year.

This Spanish garbanzo bean soup is usually served alongside some crunchy bread, such as baguette, ciabatta, or the famous sourdough bread.

This dish goes well with any beverage, but when it comes to wine, the ideal one is white or red wine. Besides that you can eat it with a glass of water, so you’ll get to taste the flavor of the spices.

If you love hot, hearty Spanish dishes, you may want to have a look at our “Poor Man Style” potatoes (patatas a lo pobre).

The best part of this Spanish soup, which is among others a typical Seville food, is that you can store it for a long time. You might ask yourself: Can you freeze bean soup?

And thankfully the answer is yes! But there are some things that you have to know first.

If you want to freeze this Spanish bean soup, you’ll have to store it without the potatoes, which means that you can freeze the soup and once that you unfreeze it you can add the boiled potatoes.

Another thing you must know is that if you choose to thicken your soup with flour or cornstarch you won’t be able to freeze it, because it develops a weird taste.

If you take those precautions then your soup can be frozen for up to one month, and it will still have the delicious flavor that it had the first day. In case you don’t want to freeze it, you can store it in the fridge for 1 to 3 days.

You can’t get enough of Spanish garbanzo soup? Have a look at my Spanish bean soup story here.

You can replace the chicken stock with water in case you want a less salty dish. If you have an extra ham bone, you can also do the stock with the ham bone.

This recipe is phenomenal! I live in the Tampa Bay Area where Spanish bean soup is very popular. This recipe rivaled any of the restaurant versions. I hate that I forgot the Cuban bread!

I am so happy you like it! It can be varied a lot though!

You can use up to one entire chorizo or half of it. Depending on your liking :)

You can use up to one entire chorizo or half of it. Depending on your likings :)

I made this soup tonight and it was a huge hit!! My husband wasn’t expecting it to be so good. He raved during the whole meal. Thanks!!

Hi Daisey, so happy to hear that! Feel free to share your photos on Instagram and tag us. We can't wait to see them! :)

I made this soup again today- thank you for the recommendation for yukon potatoes. I used jamon serrano, chorizo and added fresh chopped thyme, rosemary, oregano and ground cumin. I also added carrots and celery. This is a wonderful soup. The garbanzo beans cook wonderfully after soaking over night- I found chickpeas from Spain (La Catedral Dried Chickpea Beans). I wish I could send you a picture! It came out wonderful! Thank you so much!

Hi Lisa, thank you so much for your kind comment! This just made my day!! I would love to see the result! You can send it over to [email protected] or tag us on Instagram @visit.southernspain. Where did you find the La Catedral Dried Chickpea Beans?

Do you peel and quarter the potatoes? How big should they be cut? Russett or Yukon Gold potatoes?

Hi dear, yes I quarter them. Recently I stopped peeling potatoes since their skin has so many benefits for your health. I always have a preference for Yukon Gold potatoes.