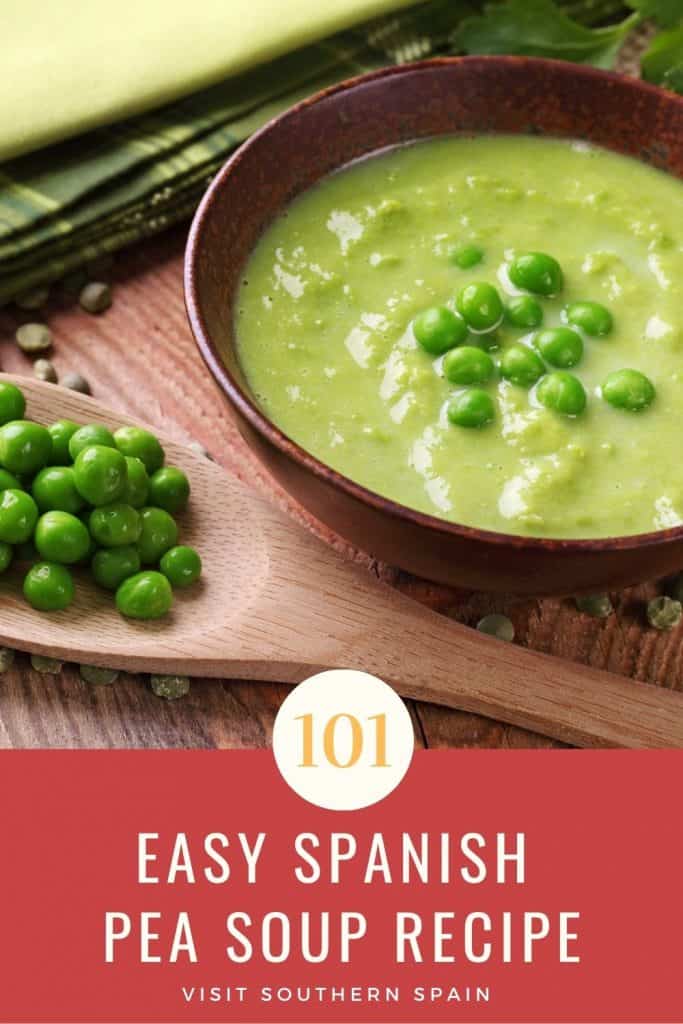 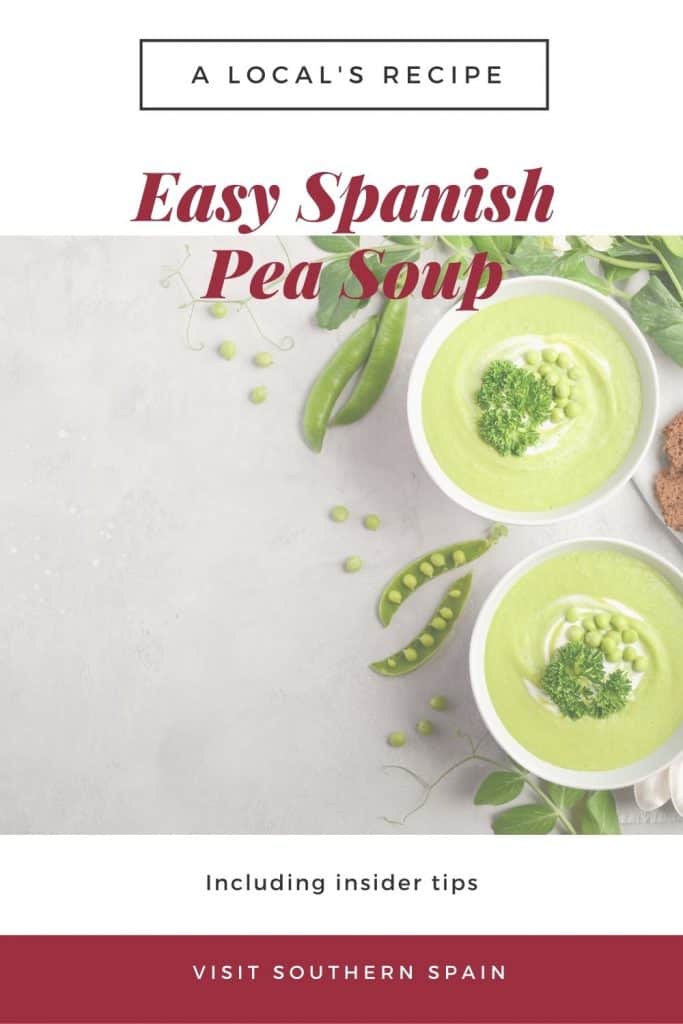 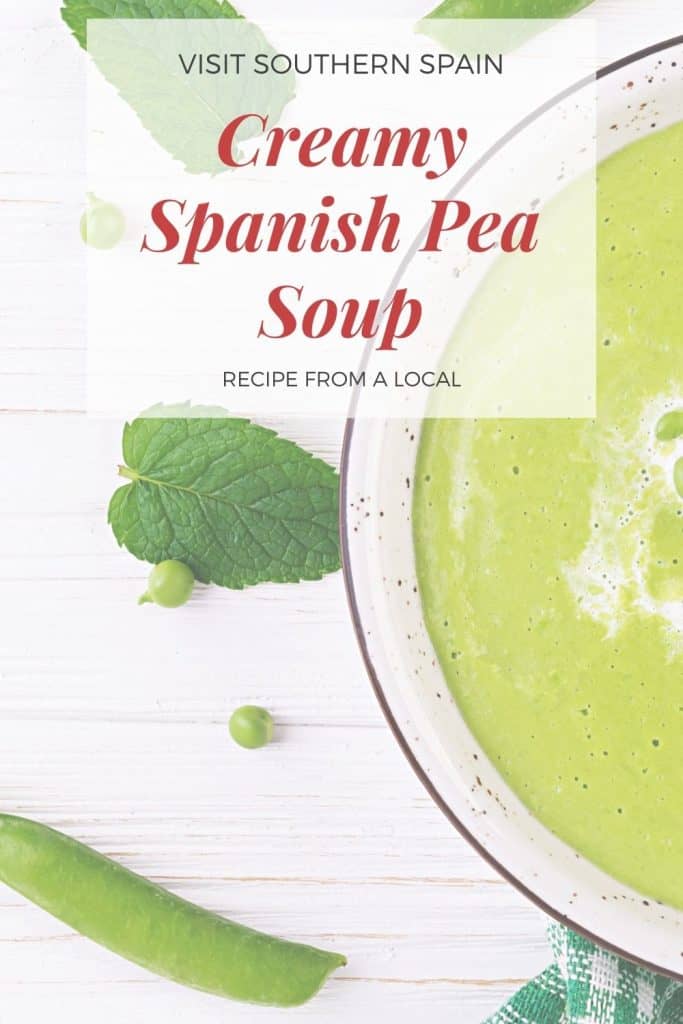 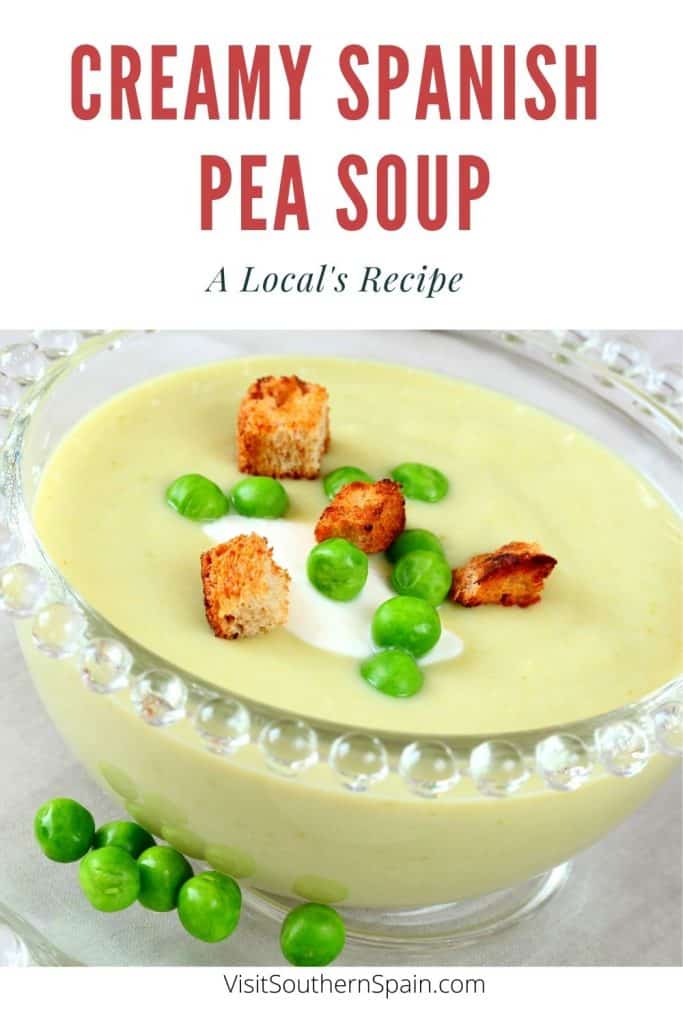 In this easy recipe guide, you will get to know better the famous creamy Spanish pea soup, or as it is called in Spanish, Sopa cremosa de arvejas or sopa de guisantes in Andalusia.

Not only will you know the recipe and different tips and variants of the ingredients, but you will also know a little about its history.

This famous soup has been around for hundreds of thousands of years. It was originally created in ancient Greece around 400 BC, and this was proven thanks to the fact that there are ancient manuscripts in which it is mentioned how vendors traded pea soup.

However, over the years it reached different parts of the world, and the typical recipe that we know today was formed in Andalusia.

The classic touches of southern Spanish cuisine can be easily distinguished in the recipe, especially with the use of Serrano ham as a topping.

For this simple pea soup you won’t need any fancy ingredients, but there are some kitchen tools that are necessary if you want to reach the characteristic creamy texture.

The ingredients are pretty basic, and there are tons of substitutions that you can make according to your personal preference or diet.

When it comes to the equipment, a blender or an immersion blender are key to get the right creamy texture for this soup. But don’t worry!

If you don’t have one you can use a food processor, or just leave the peas as they are, even though you won’t get the creamy consistency.

How to make Spanish Pea Soup – Step by Step Guide

Thankfully, you can make multiple changes on this easy pea soup recipe, so here I’ll show you the most common ingredient substitution. You can easily adapt this recipe according to your personal preferences or diet.

The flavor will be stronger and it is a really good substitution, but you have to do the cleaning and cooking of the fresh green peas before, so it’ll take a little bit longer.

Besides that you can also turn this creamy pea soup into a healthy pea soup! All you have to do is to use cream cheese instead of heavy cream and remove the butter.

You can even use a low calorie or “light” cream cheese, sour cream, and it’ll make it way healthier.

If you liked this recipe I encourage you to try other famous Spanish soups such as Spanish rice soup, Spanish oxtail soup, Spanish Garbanzo Soup, I assure you that they will become some of your favorite soup recipes to make the cold winter days.

This Andalusian food can be served in different ways, either as a starter or as a main dish at any meal of the day. Just make sure to serve the right amount for each occasion, since the creaminess in the soup makes it really filling.

The common way to serve it is hot, but if you are looking for what to eat in Cordoba, you’ll be surprised by the fact that it is also served cold! You just have to let it cool on the fridge and you’ll have a refreshing summer soup waiting for you.

I personally recommend you serving it with some crispy serrano ham since it blends really well with the different flavors in the soup. The best is to Ibérico crispy ham.

Besides that you can also garnish with some chopped parsley on top.

How to store Spanish Pea Soup

The Spanish creamy pea soup can be stored in different ways, and you can choose it completely based on your personal preference.

You can either save it in the fridge for a couple of days or freeze it for months, and it’ll still taste the same.

If you want to store it in the fridge, just let it cool at room temperature and pour it in a container with a lid. If you don’t have one of those just cover it with plastic wrap or a clean plastic bag. It can last in the fridge for up to 4 days.

This is one of the best soups to make if you want to freeze it, since unlike other recipes such as Spanish lentil soup or the Spanish chicken soup recipe that is frozen for a short time, meanwhile, the creamy Spanish pea soup can last for months without losing its freshness.

If you want to freeze it all you have to do is to let it cool at room temperature, and then store it in a container with a lid or covered with plastic wrap.

It can last in the freezer for up to 6 months, just be careful and put a tag with the date that you made it, this way you won’t forget about it!

The shallots can be replaced by leek, all you have to do is to grab the white part of the leek and chop it. The flavor and texture are pretty much the same, and you’ll get a delicious leek and pea soup.

The best spices for pea soup are salt and pepper, but feel free to use any type of pepper of your choice, such as cayenne pepper, white pepper, black pepper, etc.

I also recommend you to use more vegetables, even though the flavor of the peas will be the strongest one, if you add carrots, peppers, and more you’ll be able to add a lot of nutrients to your soup.

So you can take inspiration from the Spanish Vegetable Soup and the Spanish Garlic Soup and add some vegetables from those recipes.