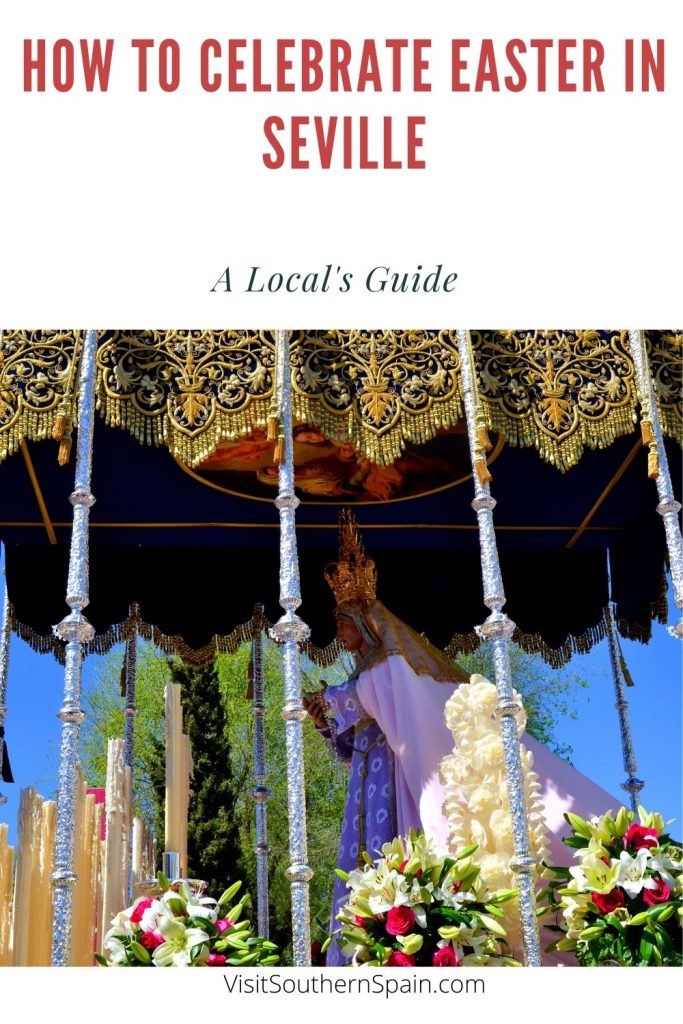 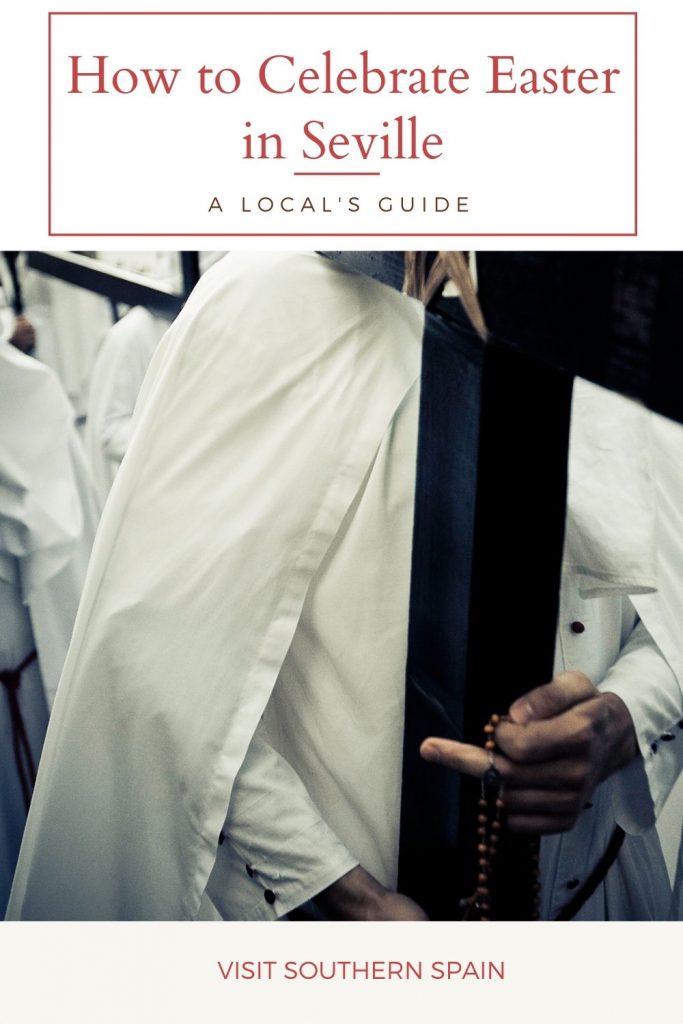 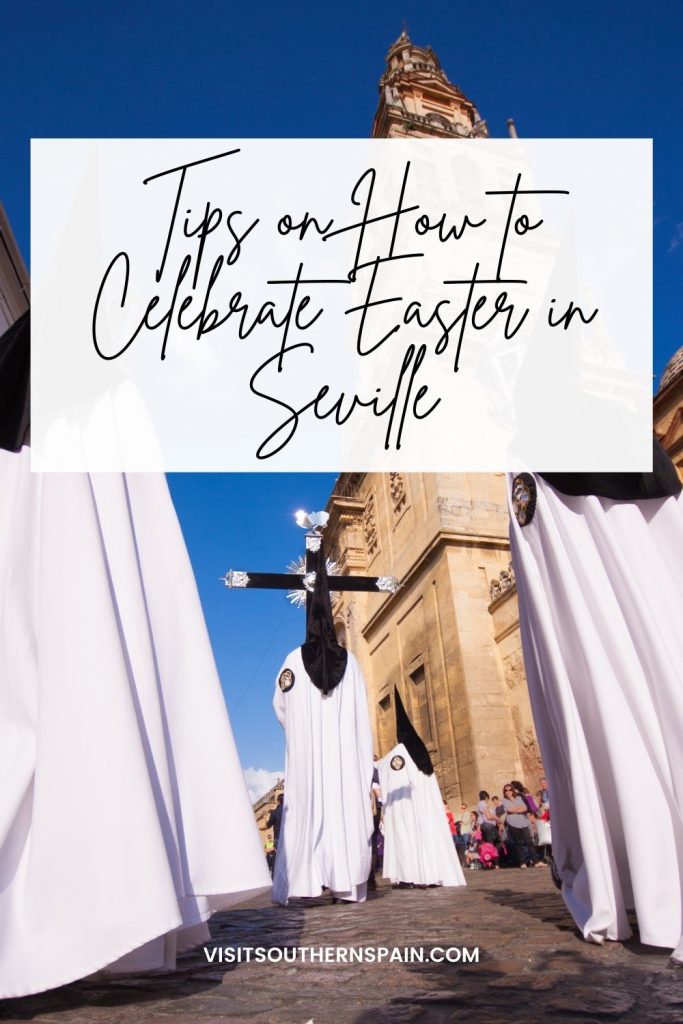 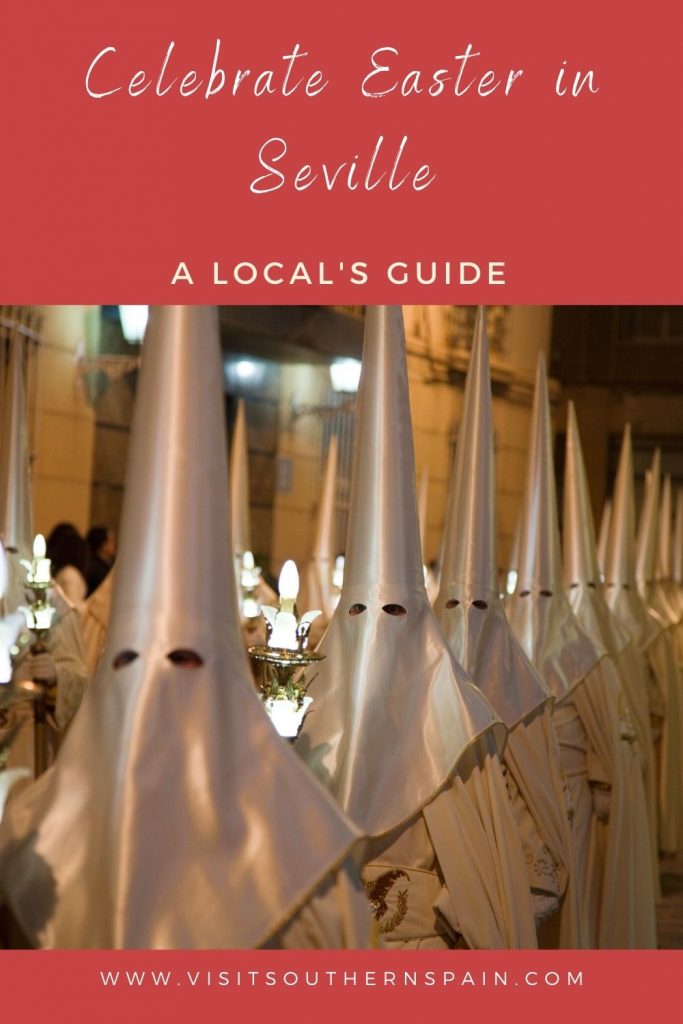 A local guide on how to celebrate Easter in Seville

Holy Week or Santa Semana as it is called in Spain is the most sacred week in the church’s calendar.

Easter in Seville is a spectacular yet somber occasion when Catholics celebrate Christ’s triumphal entry into Jerusalem and his subsequent death and descent into Hades.

Second, only to the famous April Fair Holy week celebrations in Seville are far from the chocolate bunnies and Easter egg hunts that you are used to at home.

Since the 16th century, confradias or church brotherhoods have carried highly ornate statues of Christ and the Virgin Mary from their neighborhood church to the Cathedral and back.

Often weighing hundreds of pounds, the figures depict scenes from the Passion of Christ and are accompanied by brass bands playing somber music.

After the long winter nights and cold weather, springtime and Easter in Seville are a welcome reprieve to all the time spent indoors.

Warmer weather arrives, and flowers start to poke their stems out of the earth as they are brought back to life.

Because the vernal equinox dictates it, the time of year when the subsolar point crosses the equator into the Northern Hemisphere, Easter is never celebrated on the same day and takes place on the Sunday following the first full moon after the spring equinox.

Top Things To Do In Seville

Besides all the Santa Semana Sevilla processions, there are plenty of other things to do in Seville such as:

How is Semana Santa Celebrated in Seville

Easter in Seville – The Processions

To those unfamiliar with Spanish Easter traditions, it might seem shocking to see men and women wearing hooded cloaks similar to the Klu Klux Klan.

With slits cut where the eyes are, the pointed hoods are designed to protect the identity of sinners as they repent for their misdeeds.

Called “Nazarenes” because they follow the teachings of Jesus, these repentant sinners walk in front of the elaborate floats behind a giant cross as they make their way from the church to the Cathedral.

Accompanied by bands, the processions make their way through the narrow winding streets of the old town from early morning until late at night.

The processions are magnificent to watch at night as they make their way guided by candlelight.

Depending upon the brotherhood, the number of people in the procession can range from 300 to over 3,000.

The procession can also last many hours depending upon how far the church is from the Cathedral.

Easter in Seville – The Paso

The Paso is a lifesize or larger sculpture that depicts a scene from the Passion of Christ.

Ornately carved and adorned with gold, the pasos are carried on the shoulders and necks of a team of men hidden beneath a curtain.

Called “costaleros” (sack men), the pasos appear as if they are floating on air despite the fact they weigh hundreds of pounds.

Depending on weight, a Paso requires between twenty-four and fifty-four costaleros.

Some of the pasos used for Easter in Seville date back to the 16th century and are highly prized.

Easter in Seville – The Official Route

The processions start from the brotherhood’s neighborhood church and follow a mapped-out route to the Cathedral that includes a particular area for viewing.

The best places to witness the Easter in Seville is on Calle Sierpes, Plaza San Francisco, and Avenida de la Constitució.

Easter in Seville – The Days of Holy Week

Easter in Seville – The Music

While a few processions for Easter in Seville are done in silence, most of them have some musical accompaniment.

The majority feature a brass ensemble that plays hymns or songs associated with marching bands.

Along the procession’s route, it is not unusual for onlookers to sing flamenco songs known as saetas (arrows).

When the procession leaves its home church, the band always plays the Spanish national anthem.

Traditionally worn by women on Easter in Seville on a Thursday and sometimes Good Friday, La Mantilla is a lace or silk veil worn over the head and shoulders.

Women often use a sizeable tortoiseshell-colored comb called a peineta so that veil sits above the head.

Like all festivals and traditions in Spain, Easter in Seville has its own special foods.

This is especially so during Holy Week, as Catholics are not supposed to eat meat making fish dishes, the king of Easter foods.

If you are dining out in Seville, nearly all bars and restaurants will make either fish or vegetables the main dish in their menu del dia.

In Andalucia, a chickpea and cod stew called garbanzos con bacalao, as is garbanzos con espinacas a garlic-infused dish of chickpeas and spinach.

Holy Week in Seville is an excellent time to try traditional Spanish Easter treats like torrijas and bartolillos.

A symbol of spring and the Holy Week celebrations, most devotees do not eat meat and instead resort to fish and vegetable dishes and the following sweets:

After the Seville April Fair, Easter week is one of the busiest times of the year, with the city full of locals and tourists who have come to see the processions. Semana Santa is part of the best festivals in Andalucia and one of the most beloved.

Semana Santa is a holy week, and as such, you should respect it and the devoted people who participate in the activities.

Also, visiting Seville during Semana Santa can be great for kids, as this is one of the best things to do in Seville with kids.

As a guide, the darker the color of the robes, the more solemn the procession is. Check here how to celebrate Semana Santa in other cities in Andalucia.

Wach procession has its schedule and itinerary and is repeated in the same way year after year. Here are a few tips to help you enjoy Easter in Seville:

With Seville being the capital of Andalucia and a popular place with tourists and people visiting for business, there are plenty of places to stay in some of the best neighborhoods in Seville.

Shared rooms are available in hostels for people on a tight budget, while for those for whom money is no object Seville has plenty of luxury accommodation. Below are our top three picks to suit most budgets.

Designed for people looking to have a luxury experience in an exclusive setting, this 5-star boutique hotel has only five rooms and suites.

Housed in an elegant late 19th-century mansion, the hotel is located in the historical center next to the iconic Real Maestranza bullring.

The El Arenal neighborhood where the Mercer Sevilla is located is considered the city’s most cosmopolitan area.

Preserving an atmosphere of its glorious past, the El Arenal favorite spot of Spanish writers Cervantes, Quevedo, and Lope de Vega.

Facilities at the Mercer Sevilla:

Located in the Santa Cruz neighborhood, next to the Cathedral and the Giralda, The 4-star Hotel Rey Alfonso X is an elegant hotel in a 19th-century building.

All the rooms in the hotel have been meticulously decored to blend tradition with timeless elegance.

Rated highly by guests for its location and views of the city, the Hotel Rey Alfonso X is a quiet oasis in one of Seville’s busiest areas.

Across from the hotel is a bus stop from which guests can travel to the historic center. Nearby is the El Corte Inglés shopping mall, which features a variety of shops and restaurants.

The hotel offers a buffet breakfast and has an outdoor swimming pool and sun loungers.

Facilities at the Catalonia Hispalis Hotel:

Short FAQ about How to Celebrate Easter in Seville

Is Semana Santa happy or sad?

Seen as a victory over sin and death, the six days leading up to Easter that make up Holy Week is a tragic and joyful period in Christian culture.

Therefore Santa Semana in Spain has both happy and sad elements.

Is Semana Santa the same as Easter?

Starting on Palm Sunday and Lasting until Easter Sunday, Santa Semana is the same as Easter.

Semana Santa is translated as The Holy Week which celebrates the death and resurrection of Jesus.

Despite its elaborate Santa Semana processions and rituals the week leading up to Easter, there is a lack of outward religious expression by individuals in Seville.

While most Sevillanos regard themselves as Catholic, religion is not seen as a significant aspect of everyday life and is especially true amongst young people.