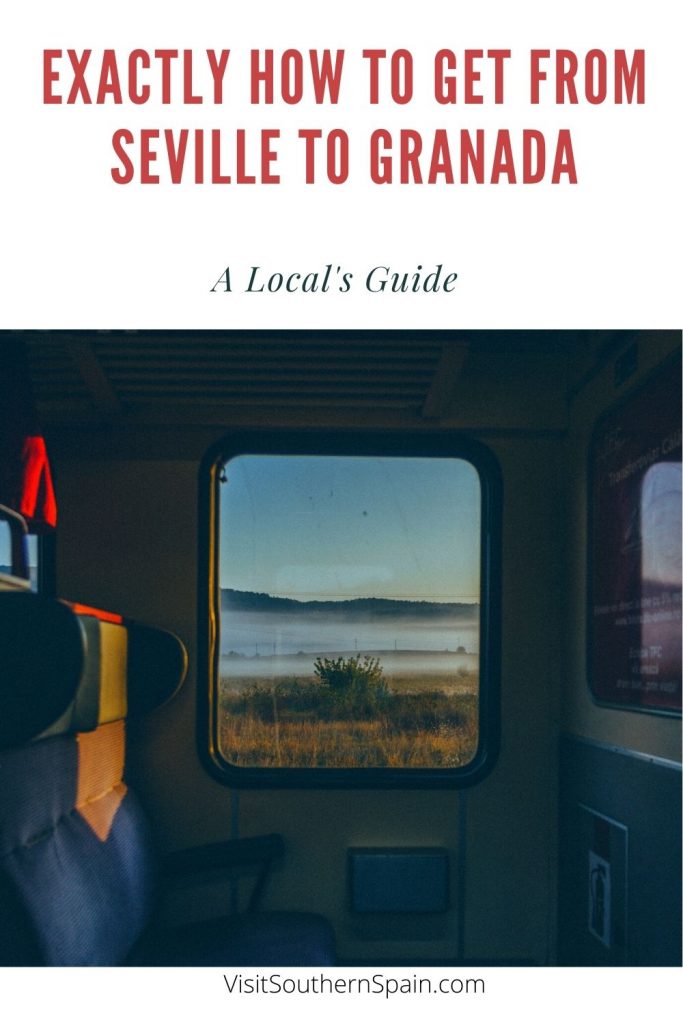 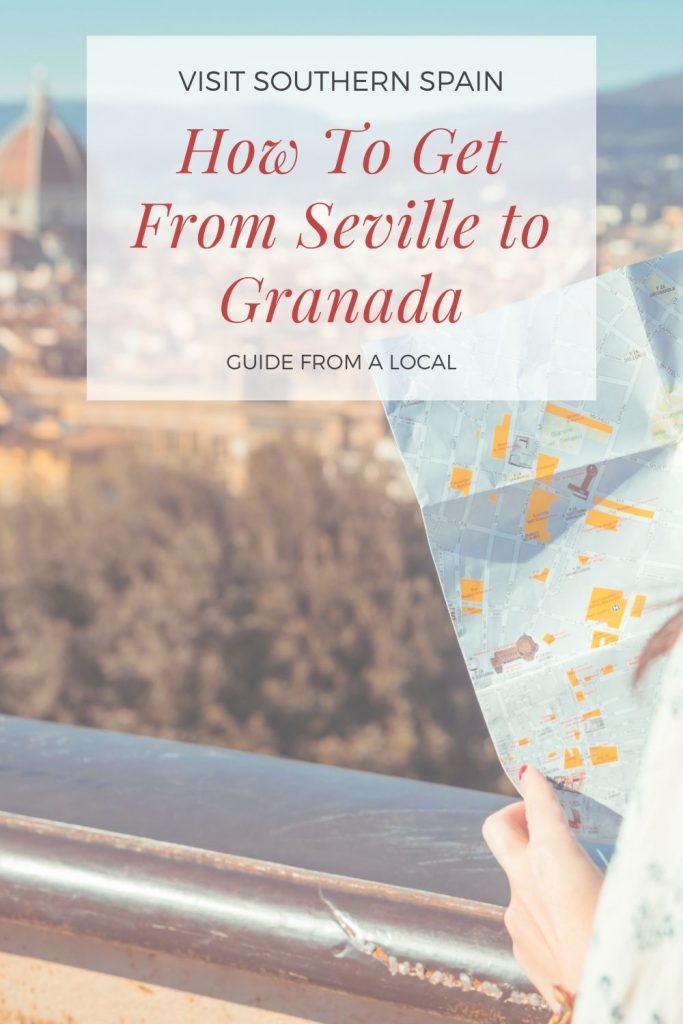 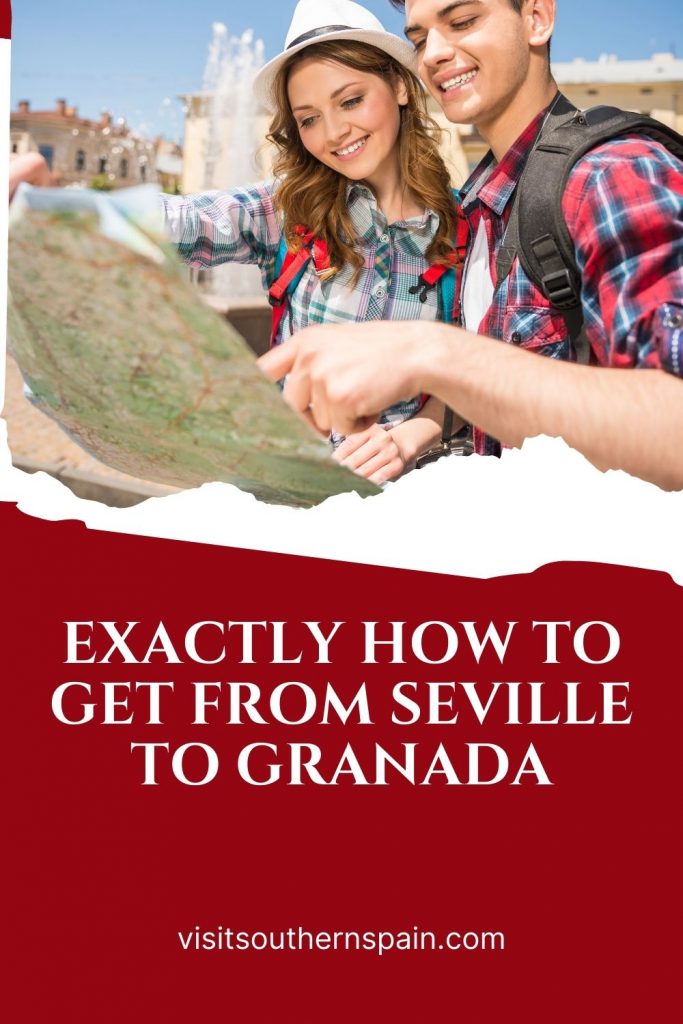 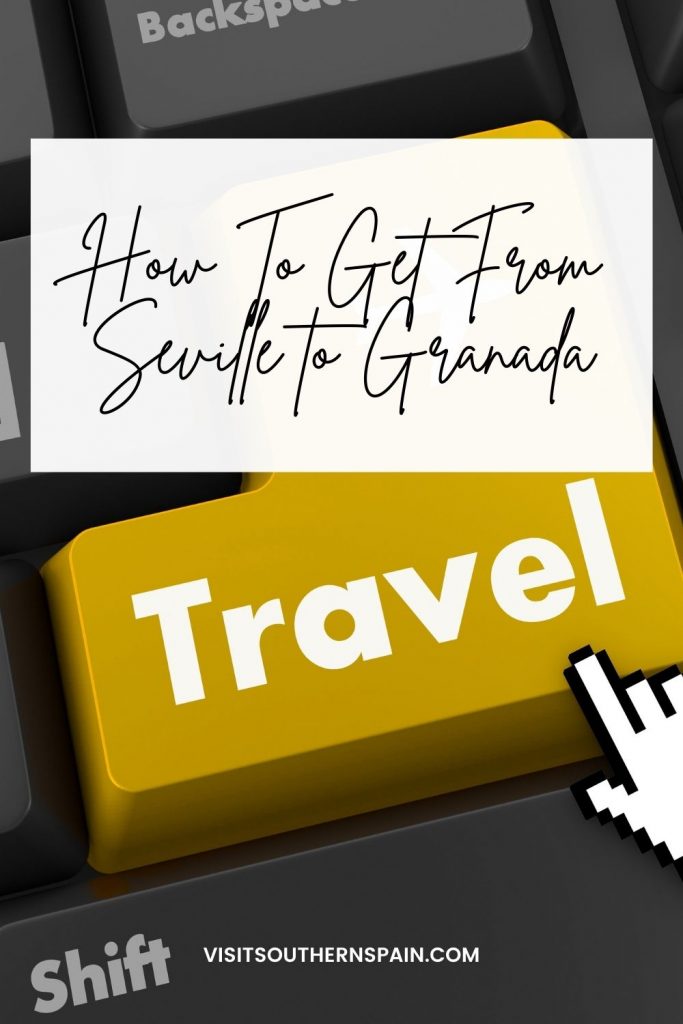 The ultimate transportation guide between Seville and Granada.

For many people, especially those coming to Spain from North America, their first taste of Spain will be Adolfo Suárez Madrid–Barajas Airport (MAD).

It is simple to get to Seville from the Spanish capital using Spain’s exceptional high-speed AVE train service.

Twenty trains a day depart from Madrid Atocha Station for the two-and-a-half-hour journey to Santa Justa station in Seville.

On the trip south, take advantage of the bar car for a beer and a snack as you travel through the Spanish countryside at speeds close to 200mph.

As the capital of Andalucia, Seville has many things to see and do, including the world’s largest Gothic cathedral, the tomb of Christopher Columbus, and the Alcázar of Seville Moorish Palace where some scenes from Game of Thrones were shot.

From Seville, visiting Granada as a day trip or as a stepping stone as you travel around southern Spain is easy.

Built by Muhammad I Ibn al-Ahmar, the first Nasrid emir and founder of the Emirate of Granada, in 1238, the Moorish fortress is one of the most famous monuments of Islamic architecture in the world.

Because tickets to tour the palace and gardens are limited to just 6,600 a day, you will need to have bought your ticket well in advance of your visit.

Distance from Seville to Granada

The distance from Seville to Granada is 130 miles, and while both cities have an airport, there are no direct flights.

This means that the best way to get from Seville to Granada is to drive or use public transport.

The drive is pleasant, and plenty of buses and trains travel between the cities daily.

Selection of Day Trips from Seville to Granada

BEST OPTION: How to get from Seville to Granada

1) The best and the quickest way to get between Seville and Granada is by train and it’s should last around two hours and thirty minutes depending on which train you take.

Spanish trains are clean and comfortable, allowing you to sit back and enjoy the views as you speed through the countryside. Another plus of taking the train is getting up and stretching as you make your way to the bar car at the train’s rear. – Check out train tickets here.

2) A second option and one that many people don’t think of is to hire a private transfer to take you to Granada and back. This can also be the most economical for a large family or group. A private transfer will pick you up at your hotel and drop you off at your desired location in Granada. You also won’t have to carry your luggage across town to get to the bus or train station.

From Seville to Granada by Train

The journey starts at Santa Justa Station 41007, C. Joaquin Morales y Torres, around a mile and a quarter from the city’s center.

There are three direct trains a day between Seville and Granada and five other trains that require a change of train in Cordoba. – Check out tickets here.

From Seville to Granada by Bus

Traveling from Seville to Granada is the least expensive option, with a one-way Superflex ticket costing 24.20€. All the buses are air-conditioned and offer free WiFi.

The bus journey between Seville and Granada takes three hours. – Check out tickets in advance here.

From Seville to Granada by Car

If you want to get around Spanish cities in Southern Spain, it may be easier to hire a rental car. The distance by road between Seville and Granada is 156 miles.

Driving between the two city’s using the A-2 motorway should take around two hours and forty-five minutes.

Having a car while on vacation in Andalucia means you can travel at your own pace and visit places that are challenging to get to by bus or train.

From the Av. de Andalucía follow the signs for Alcalá de Guadaíra/Granada/Málaga and exit onto the A-92 until you reach exit 230 toward Santa Fe/Granada/Sierra Nevada.

From Seville Airport to Granada

If you are arriving in Seville by plane, renting a car at the airport is simple, and driving to Granada is quickly done via the Autovía A-92.

If you plan to travel to Granada by bus or train, take the EA bus line, “Especial Aeropuerto” to Santa Justa Station if traveling by train or to Estacion Plaza de Armas if traveling by bus.

The buses run every 20 minutes from the bus stop directly outside the terminal. Tickets cost 4€ one way, and it takes around 35 minutes to get from the airport to the center of Seville.

If you prefer to take a taxi, it will cost around 20€ depending on the time of day. On weekends and public holidays, expect to pay more.

From Seville Airport to Granada by Train

With no rail connection from Seville Airport (SVQ) to the center of the city, never mind directly to Granada, it means you will first need to make your way from the airport to Santa Justa Station.

You can do this by taking a taxi from the airport to the station or the EA airport bus. Both methods are easy and will drop you off outside the train station.

While taking a taxi is the quickest option (15 minutes), it is also the most expensive at around 23€.

The airport bus takes 35 minutes but only costs 4€. – Check out tickets here.

From Seville Airport to Granada by Bus

With no direct buses departing Seville Airport (SVQ) for Granada, it means from the airport, you must make your way to the Plaza de Armas bus station.

A taxi is the most convenient but will cost over 20€ and take around 15 to 20 minutes depending on traffic.

The airport bus runs every 20 minutes and costs 4€ with a journey time of approximately 35 minutes. – Get tickets in advance here.

Taxi from Seville Airport to Granada

Because taxis from the airport are expensive and use a meter for payment, it would make no sense to jump in a cab at the airport.

A much better option would be to use an airport transfer service like Suntransfers.

Simply make your booking in advance, and a driver will be waiting for you in the terminal’s arrivals area, holding up a sign with your name on it.

Because you pay when you make the booking, you know precisely how much it will cost.

Booking a private airport transfer is also cost-effective if you travel as a family or with a group of friends.

A seven-passenger minivan from Seville Airport (SVQ) to anywhere in Granada costs 404€.

Book airport transfers from Seville Airport (SVQ) to Granada by clicking on the link.

Return: Travel from Granada to Seville

To return to Seville from Granada, follow the instructions above but do them in reverse.

Again we cannot emphasize how important it is to make all your travel bookings in advance.

During the summer months, there is a considerable demand for bus and rail tickets between Seville and Granada. So to avoid disappointment, book early! – Check out schedules and tickets here.

Both Seville and Granada have so many things to see and do, and with them being relatively close to one another, you would be crazy not to try and visit them both while on vacation.

If you are looking for things to do in Granada, we stand by you with some of the best options, as well as food options.

What to eat in Granada is the perfect food guide, followed by where to eat all those Spanish specialties when visiting this magic Andalucian city.

The Sierra Nevada guards Granada like a titan and if you’re in for some adventure, we have a guide to some of the best things to do in the Sierra Nevada, as well as sleeping options – 15 Best Sierra Nevada Hotels to choose from.

Can you do a day trip to Granada from Seville?

While staying in Granada for a few days is undoubtedly the best way to see the city, a Granada day trip from Malaga or Seville is a great option if you are short on time and want to see at least some of this amazing city.

Is Granada worth visiting?

Granada is worth visiting for the Alhambra alone, but with so many other attractions, it is a must-visit city during any Andalucian vacation.

Granada has a wealth of attractions, including UNESCO World Heritage Sites, and lively flamenco and tapas scenes