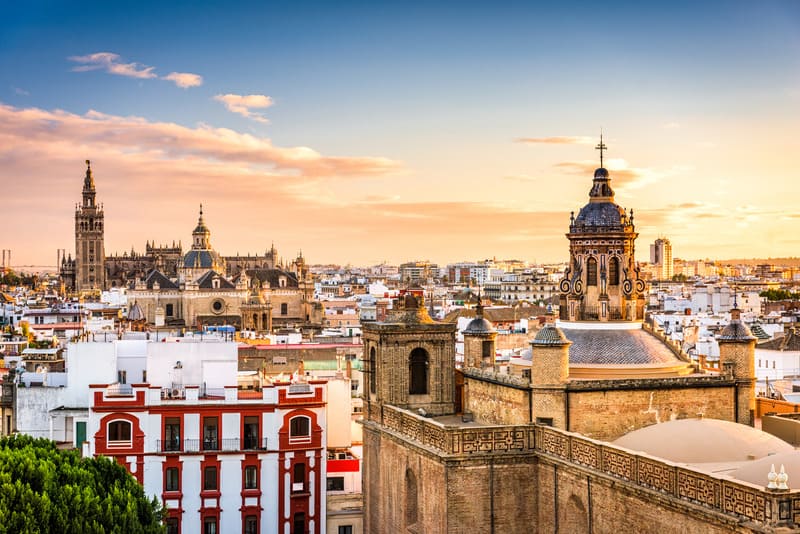 From Roman ruins to Moorish palaces, sun-baked plains and wooded river valleys, Sevilla province is home to many of Andalucia’s must-see attractions and some lesser-known treasures.

In the center of it all is the flamboyant outgoing city of Seville and its fun-loving residents who not only dress well but know how to party long into the night.

Seville is home to the region’s best known historical places, but if you can tear yourself away from its magnetic appeal, there is much more to see and do in the province of Seville.

Just nine kilometers northwest of Seville is what remains of the Roman city of Itálica and its wonderfully preserved ruins.

Founded by Roman general Publius Cornelius Scipio in 206 BC, Itálica was the birthplace of Roman Emperor Hadrian. During Hadrians’ rule, Itálica thrived while obtaining the highest status of a Roman city.

To the east of Seville lies a string of prosperous towns worth visiting, most noteworthy are Osuna, Carmona, and Écija.

Around 90 kilometers north of Seville is the Parque Natural Sierra Norte de Sevilla.

A peaceful sparsely populated area of rolling hills and woodlands. For some reason, this area of natural beauty is off the tourist map but attracts lots of Sevillanos over the weekends and on holidays.

Most Famous Attractions in Seville

Lorded over by a majestic Gothic cathedral that contains the tomb of Christopher Columbus, Seville is an intoxicating mix of Moorish palaces, baroque churches, and narrow Medieval streets teeming with life.

When planning a trip to Seville, the most important thing is finding a beautiful place to stay within your budget.

Seeing as the city of Seville is the capital of the province and has the most attractions, this is where we recommend you make your base. You have many options from the city center when it comes to day trips that range from using public transport, renting a car, or going on a guided tour.

Hostels are an excellent option for people on a budget and are particularly popular with backpackers and people just looking for a place to sleep. Hostel prices in Seville can range anywhere from 15€ to 35€, depending on the time of year. Also, expect to pay more on holidays.

Many people don’t realize that not all hostels are dormitory type shared rooms with some having private rooms available. This can equate to quite a savings when compared to hotel prices.– Check hostels in Seville here

You don’t have to spend a lot of money on accommodation in Seville, with many mid-range hotels offering rooms for less than 60€ a night. Most of these hotels are family-run establishments that are centrally located in historic buildings close to all the attractions.

And while they don’t have swimming pools, some have lovely roof terraces with views of the city. – Check hotels here

If you are looking for a family resort-type hotel where you can chill out with the kids, you might want to skip the traditional hotel and consider a self-catering apartment. This will give you all the space you need plus the ability to cook some of the delicious fresh food you bought at the indoor market.

A word to the wise, Seville can get incredibly hot during the summer, so try and find somewhere that has a swimming pool. – Check family resorts here

If you are looking for 5-star opulence and service, Seville will not let you down when it comes to an upmarket place. Many of Seville’s top hotels are located in former palaces and mansions.

At the same time, a modern contender has to be the  Eurostars Torre Sevilla ***** occupying the last 13 floors of Andalusia’s tallest skyscraper. While Paris has the George V and London the Ritz, Seville has the Alfonso XIII  – A Luxury Collection Hotel ***** built for the 1929 Expo. – Check hotels here 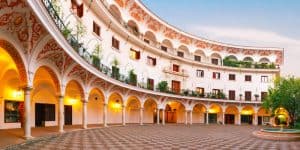 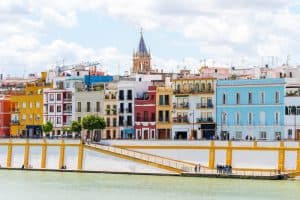 How to get to Seville

Seville Airport (SVQ) is the main airport for Western Andalusia with flights from other Spanish cities and select cities in Europe. If you are traveling to Seville from outside Europe, you will need to change planes in Madrid or Barcelona. What we particularly like about Seville Airport is its manageable size and proximity to the center of the city.

Seville Airport is a base for low-cost carriers Vueling and Ryanair. – Check flights here

Seville is easily accessible by Spain’s high-speed AVE trains and only takes about 2hrs and 30mins to get to from Madrid. These are 17 direct trains available each day with ticket prices starting at around 24€.

You can also catch a train from Seville to Malaga on the Costa del Sol and Granada to visit the Alhambra. Discounts are available for students and pensioners along with rail passes for multi-city itineraries. – Book tickets here

If you are traveling within Seville Province, taking a bus might be your only option. Spain has a very well run bus system making it easy to get just about anywhere.

If you are looking to travel to other cities in Andalusia, aways see if you can get there by rail first and use the bus as a backup. – Buy tickets here

Unless you are planning on making plenty of day trips having a car in Seville is not a good idea. Most of the top attractions are within walking distance of each other, and everywhere else is accessible by public transport.

Having a car would be good if you wanted to visit the Sierra Norte or the Atlantic beaches in the neighboring province of Cadiz. – Check car rental deals here

In order to make travel planning as easy as possible, we gathered below a selection of our favorite companies. We love them for being reliable and offering the best deals in Southern Spain. All of the recommended companies have a top-notch customer service and have been tested by us first-hand.

When to go to Seville

From a tourist point of view, the best time to visit Seville is in the spring between March and May. Hotel prices go up in the summer, and it is so hot you almost feel as if you are in an oven.

To see Seville at its best, try and visit during the six-day Feria de Abril, a grand event that sees the locals dress up in traditional Andalucian attire. If you visit Seville during the fall, you could be unfortunate and have a week filled with rain.

Seville is less crowded during the winter and more affordable but comes with cold temperatures that make you want to stay indoors.

What to eat in Seville

Life in Seville centers around food, and just like everywhere else in Spain, the main meal of the day is lunch served around 14:00.

You will find in Seville that you are given a free tapa every time you order a drink, which makes going out at night a treat.

Latest Posts about Food in Seville 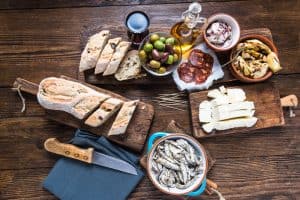 18 Best Andalusian Food to Try At Least Once!

A Guide to the best foods in Andalusia, Southern Spain incl. drinks, tapas and desserts Food in Spain is already a thing on its own.

What to do in Seville for Outdoor lovers?

When you get away from the city, you will come upon an incredible landscape full of light where you can enjoy a wide variety of outdoor activities surrounded by nature.

Encompassing parts of Seville, Huelva and Cadiz the Doñana National Park is a place of unique biodiversity, and home to the endangered Iberian lynx.

In the north of the province, you have the Sierra Norte de Sevilla, a hilly forested area where city dwellers like to escape for the weekend.

What to do in the surroundings of Seville?

Seville’s location in the southwest of Spain makes it an ideal base for exploring other parts of Andalucia.

Because of Seville’s excellent road and rail network, most places can be reached by public transport. Below is a list of day trips you can make while staying in Seville.

Located on the high-speed rail line between Seville and Cordoba, Camona has a wealth of history dating back to the Phoenicians.

Jerez de la Frontera is the home of sherry and famous for its world-renowned riding school and raceway. Read more about things to do in Jerez, Spain here.

These two towns are typical Spanish Pueblos Blancos (white villages) and can easily be visited on a day trip either by car or a guided excursion.

One the main rail line between Seville and Malaga Osuna boasts many beautiful palaces and mansions dating from the 16th to 18th centuries. The bullring in Osuna was portrayed as the Great Pit of Daznak in Game of Thrones.

Located just nine kilometers from Seville. The Roman ruins of Italica are some of the best-preserved Roman ruins to be found in Europe and contain the third-largest amphitheater in the Roman Empire. – Check tours to Italica here

Latest posts about places near Seville 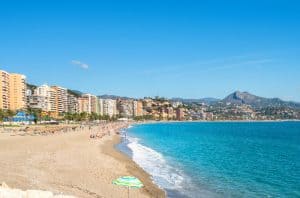 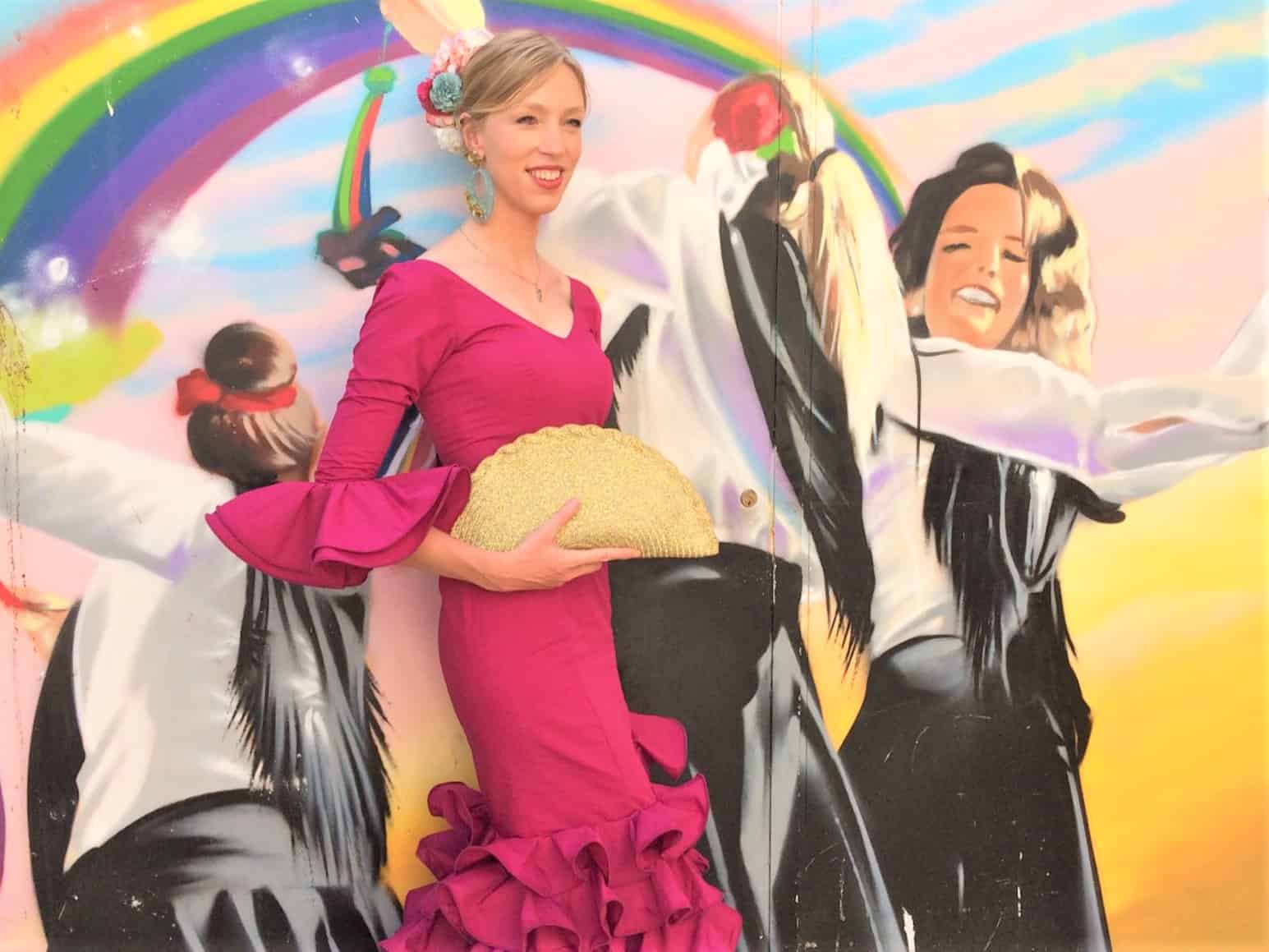 Hola, I'm Paulina! Together with my team, we are passionate about Southern Spain. Here we share all you need to know for unforgettable trips to Southern Spain with the best places to visit, stay and, of course, the best food to eat. Let's dive in and explore Southern Spain's outdoors, food and culture con pasión! Read More…