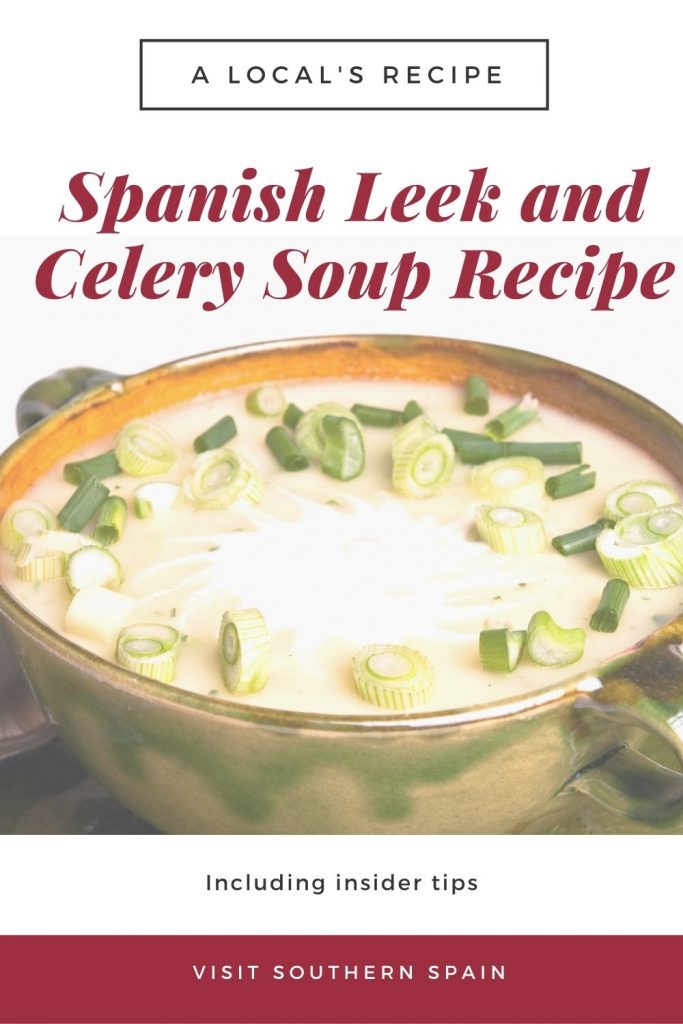 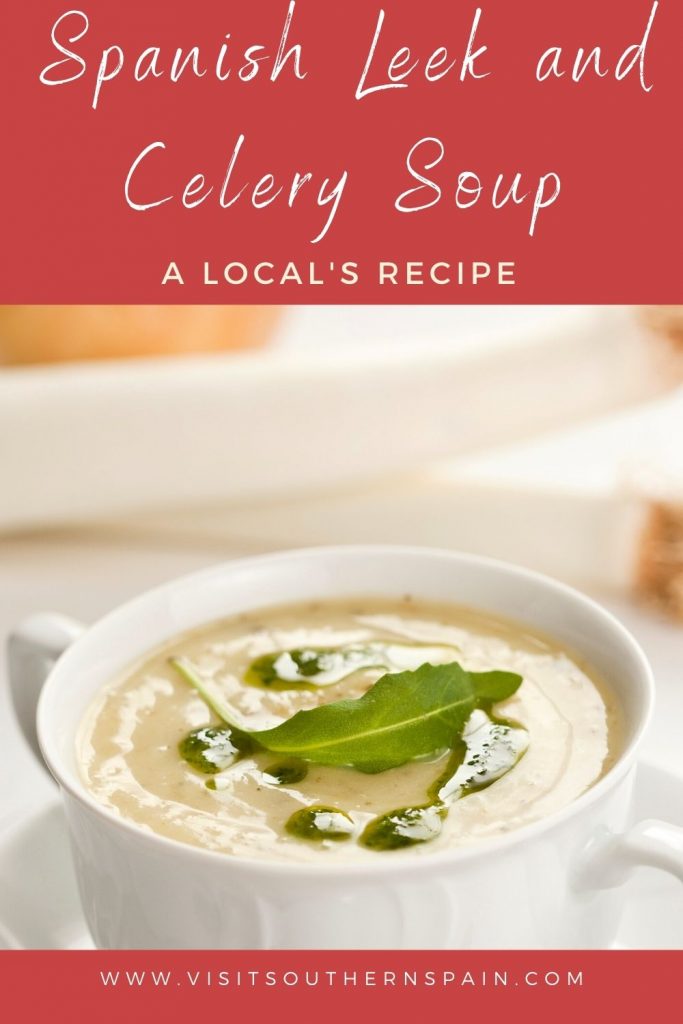 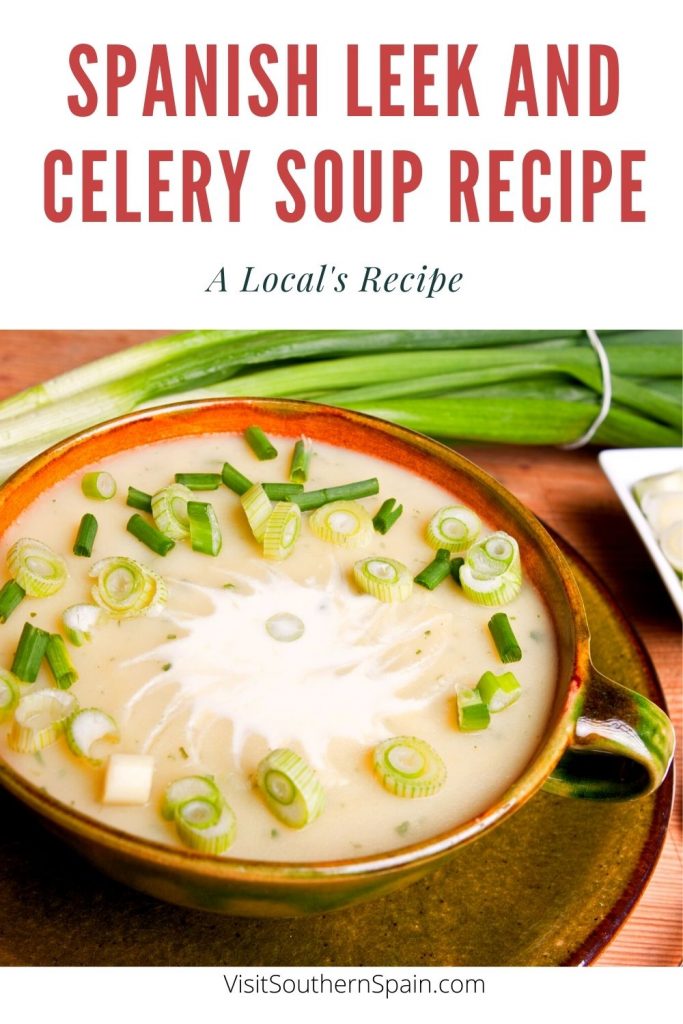 All Andalusian homes have a recipe for celery leek soup, and in this article, we will share ours!

The Spanish celery and leek soup is one of the favorites for many Andalusians to make during the winter. This is because the ingredients are very cheap, easy to find, and people often have them at home.

While it was not always as popular as it is today, it has been with us for a long time. Let’s dive right into the steps to make this leek and celery soup recipe.

At first, this soup was only eaten by the lower classes of the southern region of Spain since they used to have orchards with the ingredients of the recipe.

With the arrival of the twentieth century and the different world wars, as well as the Spanish civil war, Andalusian citizens of all social classes began to make this recipe. With the passage of time, it became a classic and regardless of the money you have, a taste of this soup will immediately take you home.

This leek and potato soup recipe reached its popularity for nothing, and only once you make it yourself will you see why. Not only that it is very easy to do, but it is also cheap so you will save money and time doing it.

The ingredients are very easy to find, and the good thing is that it uses a lot of celery and leek, which are generally not used and end up spoiling.

And the equipment is a simple saucepan of any kind, so you have no excuses not to make the leek recipe soup!

Something that you probably notice with most of the recipes for soup, is that they tend to be very adaptable, and fortunately, this soup is not the exception!

You can make substitutions in the ingredients according to your taste, your diet, and even your budget. And if in the end, you do not decide, I will recommend some delicious Spanish soup recipes for you to try.

The first change is perhaps the simplest and refers to transforming this recipe into a vegan leek soup.

As you can tell by the ingredients listed, the heavy cream is the only ingredient that forbids this recipe from being vegan, but thankfully you can change it!

One replacement that you can make is replacing the heavy cream with any type of vegan heavy cream, but keep in mind that they are hard to find.

You can also use the same amount of vegetable milk and add 2 tablespoons of vegan ghee. This way your soup won’t lose its creaminess but it’ll be a leek soup vegan.

Another replacement that you can make to the heavy cream is using half and a half of milk, but if you choose the latter you should add 2 tablespoons of butter so it doesn’t lose the consistency.

Play with the veggies!

Besides that, feel free to play with the types of vegetables that you add, you can substitute potato with sweet potato or pumpkin. You can even add corn, red bell pepper, carrots, and more.

If you liked this recipe I encourage you to try other wonderful Spanish soups recipes, such as Spanish Bean Soup, Spanish Chicken Soup Recipe, Spanish Lentil Soup, and Spanish White Bean Soup.

I can assure you that they’ll quickly become one of your favorites.

In the same way that happens with other Spanish vegetable soups, such as the hot Spanish garlic soup, you can serve this soup at any time of the day and in the amount you like.

Since this is quite a creamy soup, you can serve it with a bit of grated cheese, as it pairs very well with the creaminess of the soup.

If you are looking for what to eat in Granada, you will notice that it is commonly served with a toast of bread with olive oil, and fortunately, you can do that at home!

Take your favorite bread, put a little olive oil on top, and put it in an oven at 180 ° C for 10 minutes, turning it halfway. If you accompany your soup with this toast, you will give it another texture with a delicious flavor.

If you’d love to try another recipe with leek, that is just as delicious and healthy, then you should try our Spanish tomato and leek soup recipe.

Celebrate Halloween just like the Spaniards do, and prepare a creamy and comforting chestnut soup with chorizo or have a comforting soup for the autumn season with our Spanish pumpkin soup recipe.

How to store Leek and Celery Soup

You may initially think that because it contains heavy cream this recipe cannot be frozen, but make no mistake! I will tell you different techniques so that you can freeze it or store it in the refrigerator without it spoiling.

Being a vegetable cream soup it can only be frozen for 3 months.

What you should do is separate it into portions and freeze it, so that when you are ready to defrost it, you only get the amount you need.

This recipe doesn’t have a lot of cream or dairy on average with the rest of the ingredients, so you shouldn’t worry.

You can pass the celery soup through the blender to have a smooth and creamy texture, this way you make sure that all the ingredients will stay the same when frozen, and none will be ruined.

When you are ready to unfreeze it, you just have to take out the necessary amount and leave it in the refrigerator the night before. Anyways, if you think that it is crystallized, you just have to pass it through a blender and you will have your soup completely creamy.

Then heat the soup in a pot over medium heat, stirring constantly to ensure that there are no crystals of the cream and that the soup remains creamy. If you think it is very liquid you can add two more tablespoons of cream, or two tablespoons of flour to make it thicker.

Apart from that, you can keep it in the refrigerator where it will last up to 3 days without any problem.

Since this is a leek vegetable soup it calls for vegetable broth, but you can use any of your choices. You can even use 2 stock cubes with boiling water to replace the broth.