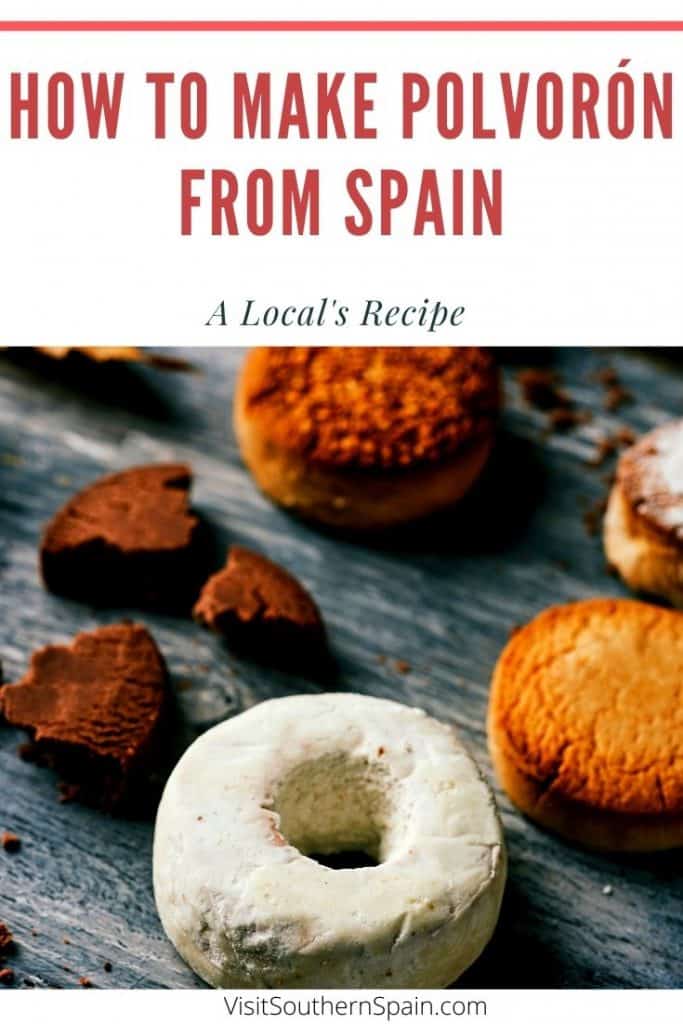 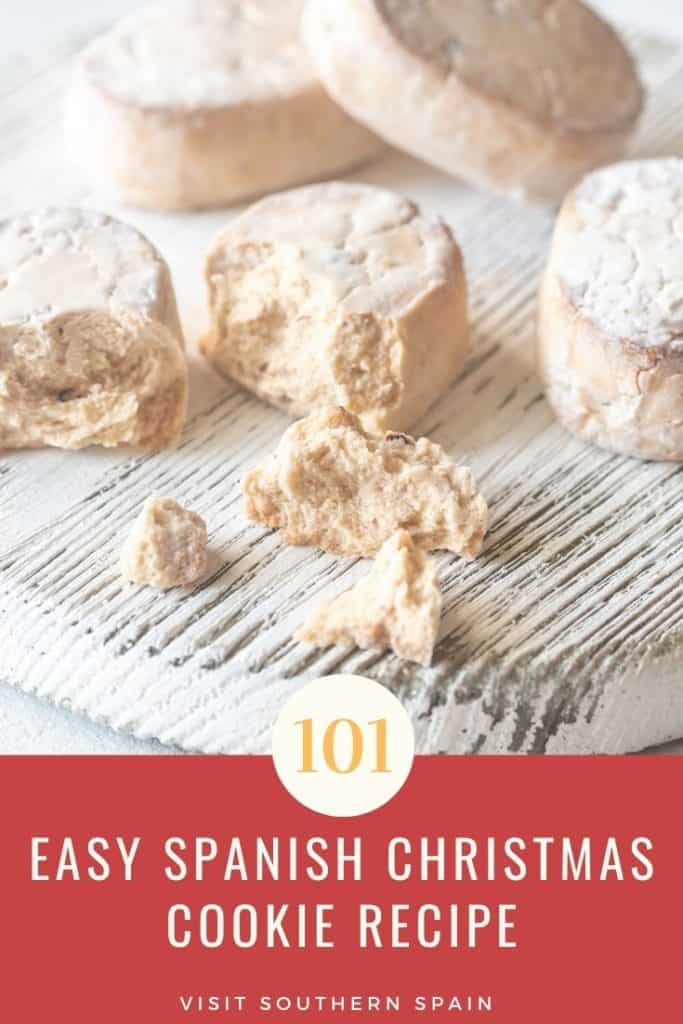 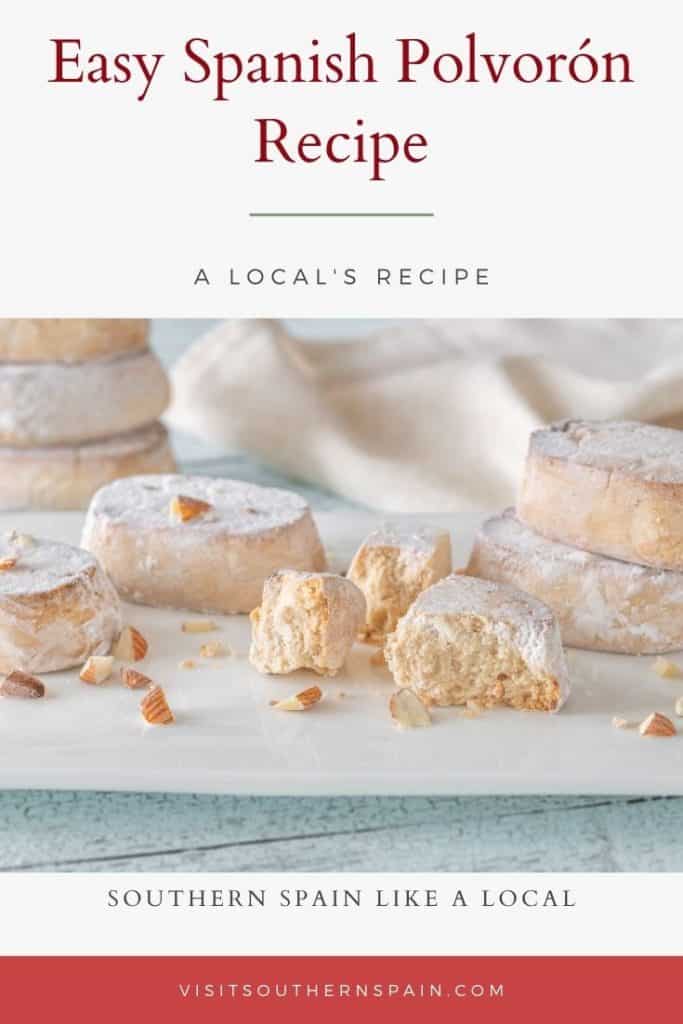 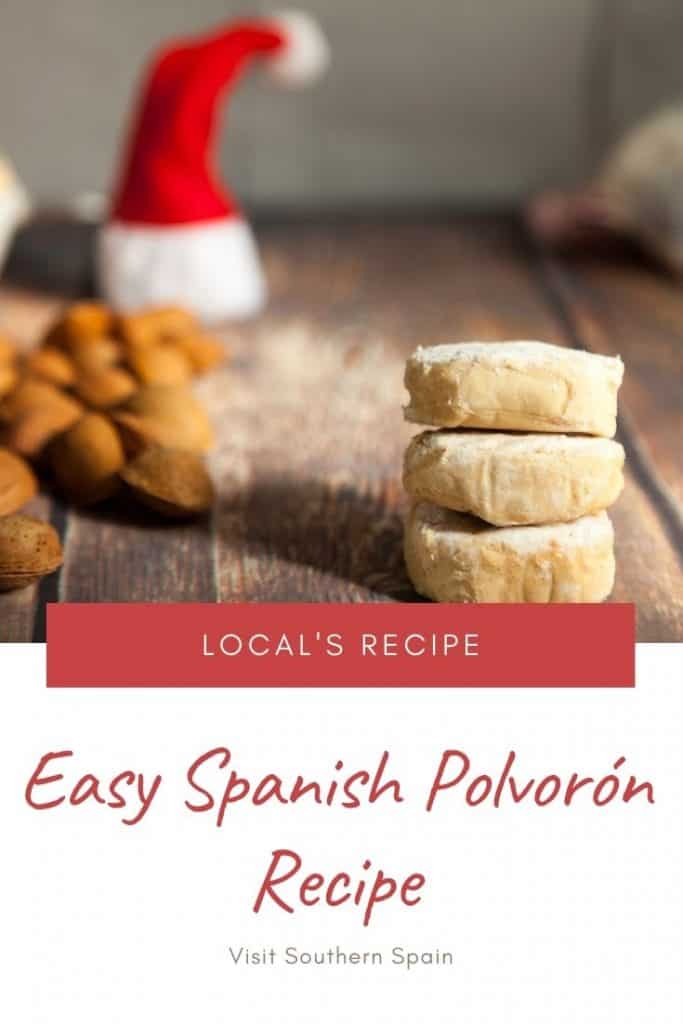 In this article, you will learn how to make polvorón! This is perhaps the most popular Christmas cookie in all of Spain.

These cookies have their origin in Andalusia during the time of the inquisition, whereby eating them, people demonstrated their faith in the Catholic religion.

There is also a Filipino version of this dish, however, we’re going to focus on the Spanish recipe that’s used all over Spain and particularly in Southern Spain.

Due to this relationship between polvoron and the Catholic religion, this type of cookie continues to be a main dish during Catholic festivities. It’s called a polvoron because it melts in your mouth.

This is a pun in Spanish since “polvo” means dust in English because that is how it feels when you eat it.

The provinces of Seville and Cadiz are the ones that produce the most this type of cookies, producing hundreds of tons per year. Therefore, you should not be surprised by the popularity of the cookie in Andalusia and throughout Spain.

Nowadays it’s one of the most popular Christmas foods in Spain!

To make this recipe of polvoron you’ll need the basic equipment that is used to make all kinds of cookies.

For example, you’ll need a cookie cutter, preferably a round one, but you can use any type you like such as a heart-shaped cutter, star-shaped cutter, anything will work!

If you don’t have cookie cutters don’t worry! You can use a glass or even cut the shape that you want with a knife.

Besides that, you’ll just need a cooking sheet and you are ready to start with this Spanish polvoron recipe!

If you’re after some of the best Spanish desserts and love chocolate, then make sure to try our ultimate Spanish Chocolate Chip Cookies Recipe.

How to make Spanish Polvoron – Step by Step Guide

For this polvoron cookies recipe, there are many ingredients that you can replace or add new ones.

For example, you can replace the lard with the same amount of regular butter, even though you might not get the exact same crumbly texture.

You can also make a classic chocolate polvoron recipe by just adding 45g (3 tablespoons) of cocoa powder (without sugar).

Besides that, you can add 1 teaspoon of cinnamon or ½ teaspoon of nutmeg if you want to add those classic Christmas flavors to this cookie.

The polvoron nutrition facts will vary according to the ingredients you use for your polvoron cookies.

So if you or one of your guests it’s on a diet, you can lower some calories by using brown or organic sugar or replacing the amount of lard with any vegetable oil.

Mantecados are lard cookies as well, that are baked for Christmas in Spain and you must definitely try them.

Nothing says Christmas time more than a plate of polvoron, Spanish Marzipan, Christmas Pastries, or Turron.

These cookies are commonly eaten during breakfast or as an afternoon snack during the holidays.

If you are looking for what to eat in Seville during Christmas time, you might find that they usually serve them with tea, so you can dip your cookies in it!

Any drink will go well with these cookies, from coffee to Spanish hot chocolate, everything works perfectly.

The best thing that you can do is prepare a big batch of cookies and let your guests grab as much as they want, the cookies will be done in seconds!

It’s one of the most popular Spanish dessert recipes during Christmas time. If you want to try yet another recipe served on a special holiday in Spain, the Santiago Apostol’s Day, make sure to try our Spanish almond cake.

How to store Spanish polvoron?

You can keep these cookies for two or three days in a tin or Tupperware, making sure they are well covered. If you want to freeze it, there are different ways and tips to do it.

If you have room in your freezer, the best thing you can do is freeze the raw dough but once that you cut it into a cookie shape.

This way once you remove it from the freezer you can put it directly in the oven, although it will probably take 5 or 10 more minutes to cook.

You can also freeze the raw dough before cutting the cookies, then when you want to defrost them you must take them to the refrigerator and wait a couple of hours or until you feel that it is ready to be stretched.

Here you have the recipe card, all handy, on how to make polvoron.

Recipe card – How to make Polvoron

You can add cinnamon and nutmeg to the flour since they’ll definitely add a Christmas flavor to the cookie!

Polvoron is a traditional Spanish Christmas food. Its name is a play on words in Spanish, since “polvo” in English means powder, due to the crumbly and soft texture of the cookie.

Where does polvoron come from?

They originated in Andalusia, and thanks to the fact that the southern region of Spain had a large port and advanced commercial activity, these cookies quickly reached the whole world. Nowadays it’s a popular dish in the Philippines too.

Why is lard used to make polvoron?

Lard was originally used because pork is an animal that abounds in the forests of Andalusia, so people had more access to it instead of the regular lard that we consume today. At that time, butter was hard to get.

Hi! Yes, you can use ordinary ones.

My favorite polvorones were the lemon ones, how would I make that flavor?

Hi dear, thank you for your comment. For a more intense lemon flavor, you can add some lemon zest to the dough.

I want to learn how to make Spanish polvoron and get more ideas.

Thank you for your comment! Well you are at the right place dear! Let me know how your recipe went!