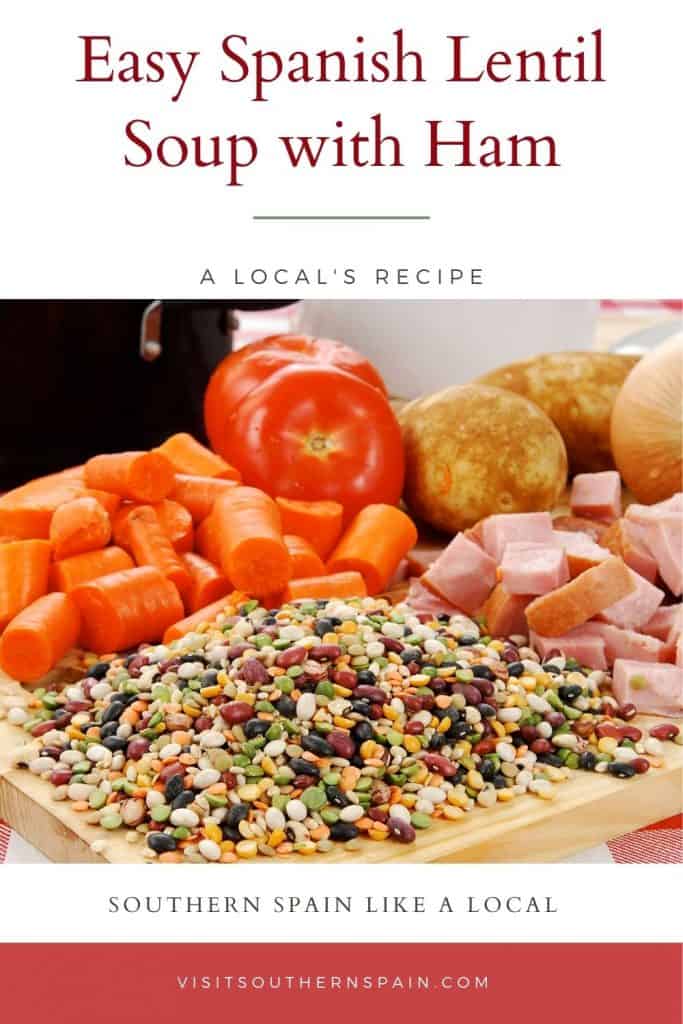 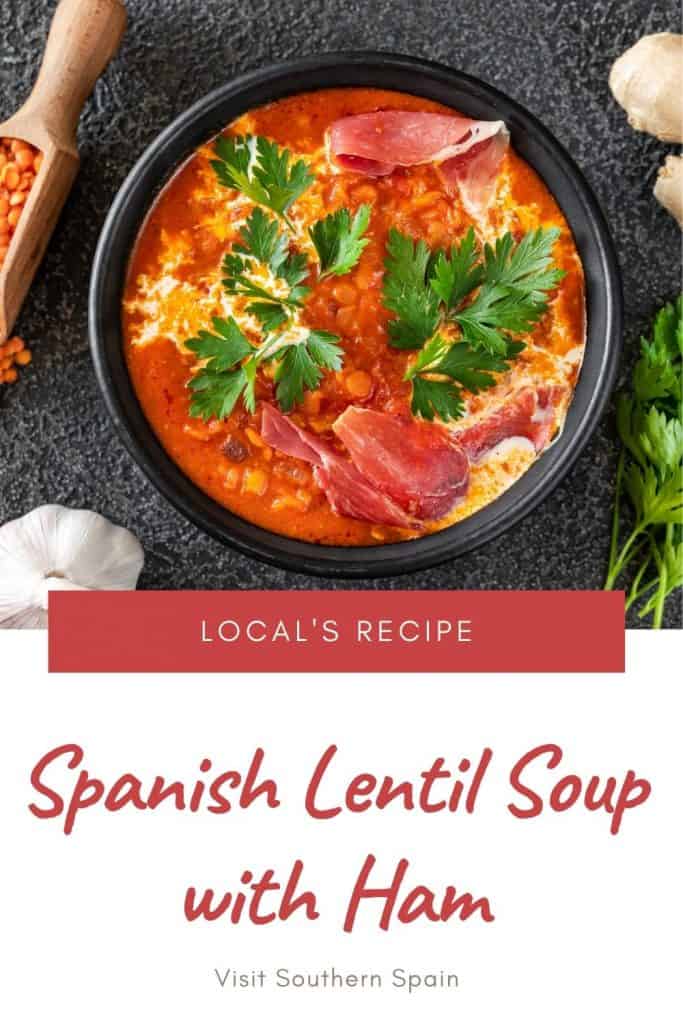 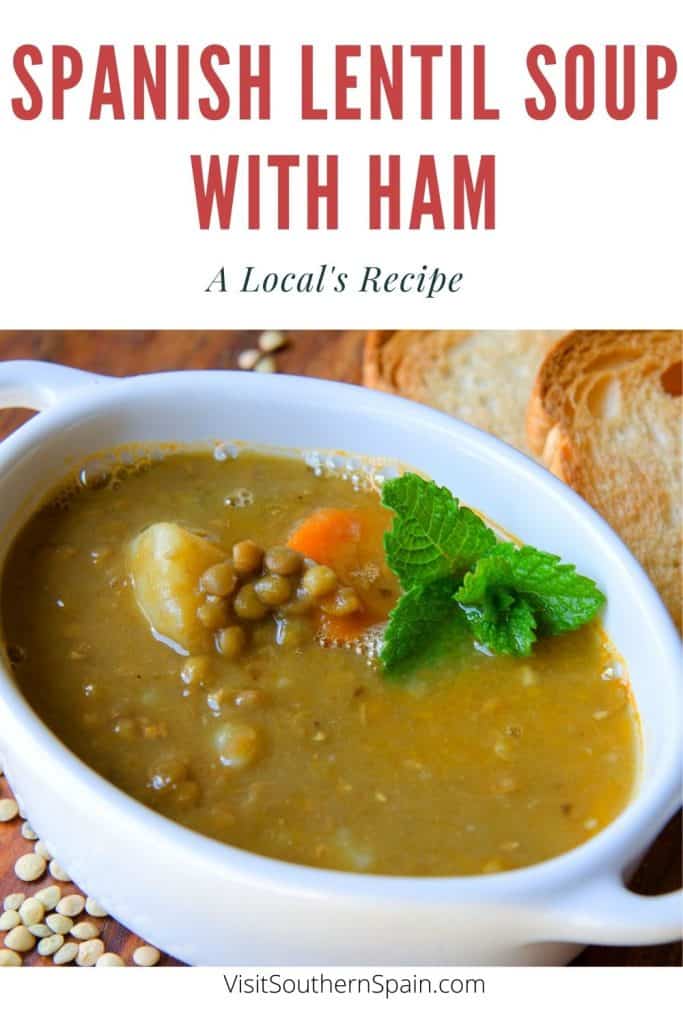 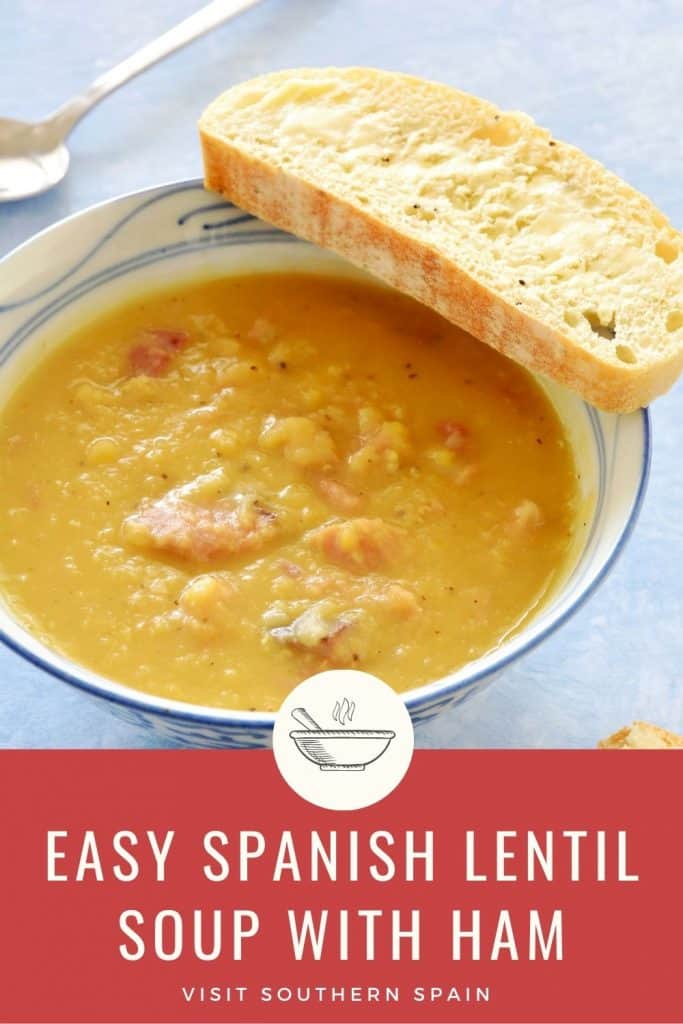 There are different versions throughout the world of the famous lentil soup, but without a doubt, one of the best is the Spanish lentil soup with ham.

This soup combines the flavors of different vegetables with the presence of ham, which makes it a very tasty and filling soup.

So I invite you to read this article and learn more about the popular lentil soup and take note of this ham and lentil soup recipe, as it will undoubtedly become one of your favorites.

Let’s dive into how to make Spanish Lentil Soup with Ham.

If you visited the south of Spain or are lucky enough to live in that region, it is likely that you are already familiar with lentil and ham soup, and that you have even eaten it many times.

However, there is a large part of the history of this recipe that you may not know.

The creation of this recipe for ham and lentil soup is currently known as a mix between Middle Eastern cuisine and Andalusian cuisine.

Thanks to the commercial exchange of both regions that had a boom in the 18th century, it was possible to combine two popular ingredients from each place; Spanish ham and Middle Eastern lentils.

It was originally considered that eating Spanish Lentil Soup (with Ham) helped you improve your state of mind, removing any type of depression or emotional problems.

Over the years, scientists discovered that this is because people were likely to suffer from anemia or some other type of illness related to malnutrition, and a large number of nutrients in this soup made them improve quickly.

In the present day, this recipe for lentil and ham soup continues to be extremely popular since it is ingrained in Andalusian homes, and it is also pretty cheap and easy to make.

I recommend that you try it and fill your body with all the nutrients that these ingredients offer you!

For this easy lentil soup with ham recipe, it is very likely that you already have everything you need in your home!

The best part of this recipe is that the only kitchen tool that you need is a large pot where you can fit everything, so it is really simple!

As it happens with most lentil soup recipes with ham, you might have some trouble finding the type of lentils or ham that this recipe calls for, but don’t worry!

I’ll show you all of the ingredients replacements that you can make.

So what are you waiting for? Give this recipe of lentil soup with ham a try! Spanish Lentil Soup with Ham is one of the easiest to make!

How to make Lentil Soup with Ham – Step by Step Guide

You can change this ham bone lentil soup and customize it however you want! There are hundreds of changes that you can make in the ingredients and in any case, this soup will continue to have its essence and Andalusian stamp.

The recommendation that I always make, and not only for soups but also for other dishes, is that you do not be afraid to experiment with spices.

For example, this recipe could be seasoned only with pepper and alone calmly, but I invite you to add a little turmeric and paprika to highlight all the flavors and even add more color to the soup.

When it comes to vegetables, this recipe also allows you to play a lot. You can add different vegetables like potatoes, sweet potatoes, or even corn.

If you want a vegetarian version of this dish, you can make it just by removing the ham, although you should also replace the water with vegetable broth since otherwise, it will have little flavor since will lack the fat from the ham.

As for the ham, I recommend using Jamon bone, although without a doubt you can make this same lentil soup recipe with ham hock. I personally recommend the ham bone because it tends to have a better texture and is easier to cook. Anyway, you can also make it with Spanish chorizo, or oxtail.

Finally, for this recipe you can use any type of lentil that you like, although remember that they can have different cooking times so keep that in mind when making the recipe.

Even a recipe that was made very often in my home was with a can of cooked lentils and a can of beans, in this way my mother made a sort of lentils and bean soup with a ham bone.

If you want to try another comforting autumn soup, we encourage you to try the Spanish chestnut soup with chorizo.

There are many ways you can serve this lentils and ham soup, and some will help you innovate and make your dish seem like part of the menu of a fancy restaurant.

Something you can do if you want your plate to stand out is to use medium country bread rolls, hollow them out, and serve the soup in there.

At first, it may seem difficult, but it is very simple and the bread bowl contains the soup very well. In the same way that you would with a Spanish bread soup, you can add the leftover bread crumbs, or even toast it with olive oil and use it as croutons.

Finally, you can serve it at any time of the day and in any amount. If you are looking for what to eat in Seville, you will notice that they offer a version of this lentil soup with ham bone both as a main course or as an entree, where only the size of the dishes varies.

If you want to try other lentil recipes, we recommend you try the Spanish lentils recipe, which is a hearty and delicious Spanish stew.

How to store Ham and Lentil Soup

If you made more ham bone lentil soup than what you needed, or you simply want to make and eat it another day, there are different tips that will help you do it without failing when trying.

Next, I will give you some tips that will make this soup become one of your favorites for meal prep.

The easiest thing to do if you want to store this Spanish ham and lentil soup is to wait a couple of minutes for it to stop steaming and store it in the refrigerator.

You can keep it in the same pot or transfer it to smaller containers. If you do the latter, it will cool down much faster. Then you just have to heat it!

This ham and lentil soup lasts up to 4 days in the refrigerator.

As with other soups that contain meat, such as Spanish beef soup or Spanish oxtail soup, you are often left wondering whether it can be frozen or not.

The good thing is that if you make it with this lentil soup recipe with ham, then it can be frozen without any problem, and it will retain its flavor until the last day.

You just have to make it cool before freezing it, you can do it in the refrigerator if you wait for it to stop releasing steam, or if you don’t have that much time you can transfer it to a bowl and place it on top of a bowl full of ice, this way it will cool quickly.

Then store it in a bowl, or you can separate it into small containers to remove just what you want to eat. It can last up to 3 months in the freezer without losing its flavor.

To unfreeze, leave it the night before in the fridge. Never thaw food at room temperature as this will expose it to hundreds of bacteria.

This lentil ham soup recipe calls for water instead of broth, this is because the ham bone already adds a lot of fat and salt to the recipe.

If you use broth, try to use a low-sodium one, otherwise, it’ll be way too salty.

You can replace the green lentils with any of your choices, or you can even use beans or white beans. If you choose the latter, I recommend you to check the Spanish Bean Soup and the Spanish white bean soup, you can add ham to either of those recipes without any problem!