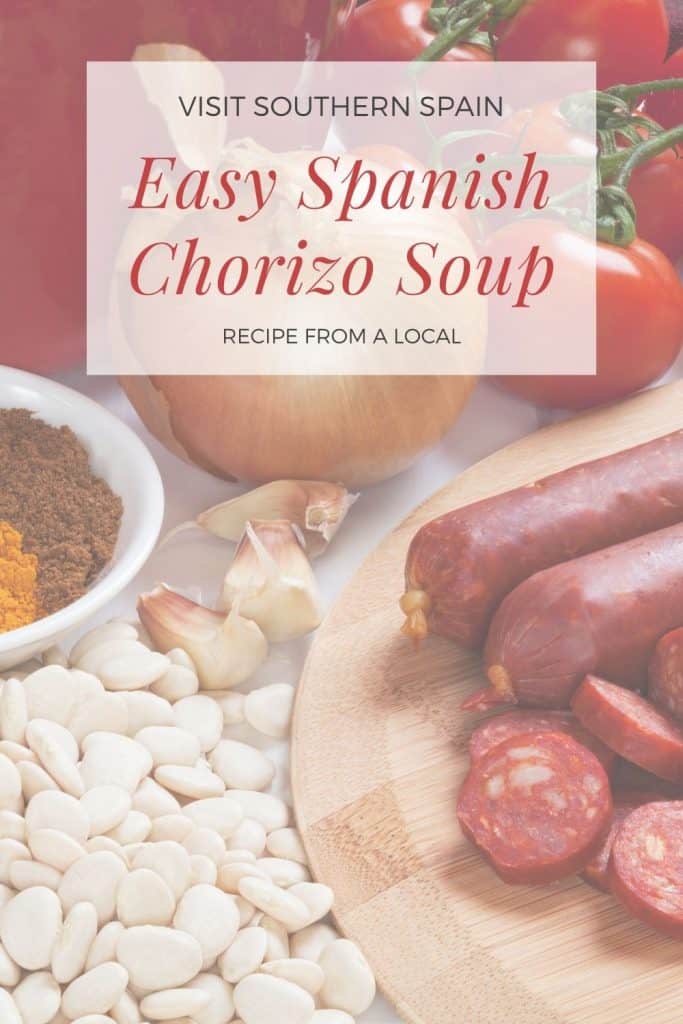 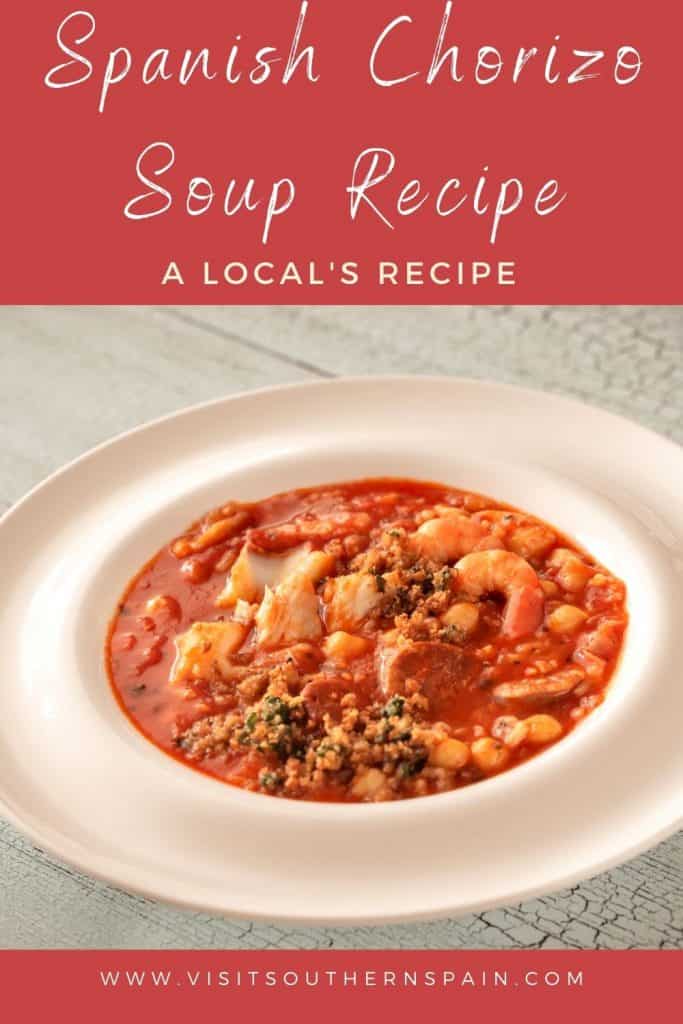 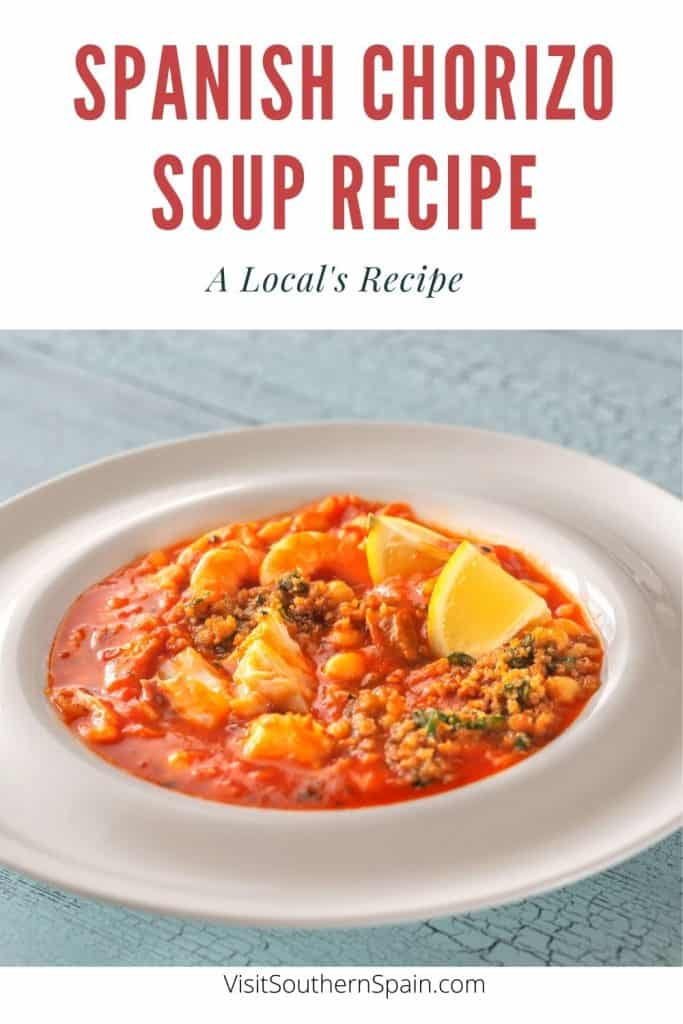 In this easy Spanish recipe, I will show you how to make the famous Spanish chorizo ​​soup, which is one of the favorites for all Andalusians and that you will love!

I assure you that this recipe will quickly become a classic and one of your favorites to make in the winter.

The Chorizo ​​soup had its origins in southern Spain during the 19th century but reached its peak of popularity in the 20th century.

This dish combines two classic ingredients in Spanish soup; the lentils and the chorizo. This makes it very nutritious and ideal for winter days in Andalusia.

You may wonder what is Spanish chorizo, so here I will give you the answer! Chorizo ​​is a type of Spanish sausage made with pork, and it is usually seasoned with garlic or paprika, so it is full of flavor.

This ingredient is extremely popular in Andalusian cuisine and throughout Spain since it can be found in all stores and at different prices that adapt to the pockets of each citizen.

Fortunately, this Spanish chorizo ​​soup recipe is very simple to make, it can be made by anyone without having to have culinary knowledge, and without the need for hundreds of kitchen tools.

As for the kitchen equipment, you will only need a Dutch oven or a large pot, feel comfortable and use the one you always use to make soup.

Like other recipes with Spanish chorizo, the most difficult ingredient to find is the chorizo ​​itself, but don’t worry! Later I will give you many tips with replacements that you can make in the ingredients.

The best Spanish chorizo ​​is the one that is smoked and marinated with different spices, but whatever you find will do for this recipe.

How to make Spanish Chorizo Soup – Step by Step Guide

There are dozens of replacements and changes you can make to the recipe ingredients, and you’ll still have a delicious soup.

In addition to that, you can make changes to the spices using just black pepper, or adding spices like Curcuma, smoked paprika, or curry to give it a more Asian taste.

For more Asian-inspired flavors, try adding a sweet potato and spicy chorizo (instead of mild chorizo).

You can also replace the water with vegetable or meat broth, but I personally do not recommend it since the chorizo ​​provides enough fat and flavor for this recipe.

Feel free to see our recipes for Spanish white bean soup or Spanish Garbanzo Soup and there you will see the different ways of cooking for each one.

If you liked this recipe, I encourage you to try the famous, hot Spanish Garlic Soup, the Spanish Shrimp Soup, or the Spanish rice soup.

As well as other Spanish soups, this Spanish Chorizo soup can be eaten at any time of the day, since lunch will leave you full for the whole day, and like dinner, it will make you go to sleep satisfied but not heavy.

If you are walking and looking for what to eat in Granada, you will notice that this dish is served both as a starter and as a main dish, so you can do this yourself at home.

Obviously, you should change the size of the dishes since this is a very filling soup. If you’re looking for another hearty recipe with chorizo, try our traditional Spanish Migas recipe, which is the perfect breakfast!

Now, in the same way, that you would do with a Spanish oxtail soup or a Spanish Beef Soup, it is always recommended to serve it with water, or a glass of good wine, since the sweetness of the soda can overshadow the delicious taste of the soup.

Preparing a soup is always a good idea if you want something comforting and nutritious as well. For example, Albondigas soup from Spain has everything – delicious and savory meatballs and healthy veggies.

How to store Spanish Chorizo Soup

Luckily, you can make this recipe beforehand and then serve it whenever you want, anyway, there are a couple of tips that will help you store it without getting ruined in the process.

The easiest way is to store it in the refrigerator, where it can last up to 3 days without any problem.

You just have to let it cool to room temperature, cover the pot or transfer it to a bowl and cover it with plastic wrap or a clean plastic bag.

Now, if what you want is to freeze it so that it lasts longer, you can also do it but I will give you some tips that will make your life easier.

For example, I always recommend freezing it in portions, for this, you can use containers with a lid, and then when you want to eat it you just have to unfreeze the number of portions you want.

Apart from that, I recommend you put the date with a label and a marker, so you know when you made it and how long you have to eat it.

It is always recommended to freeze it for up to 30 days, so you can also write that on the label.

For this Spanish chorizo recipe, you can replace the water with any broth of your choice (vegetable, chicken, beef, etc.) but keep in mind that the chorizo already adds enough flavor to the soup.

If you or any of your guests can’t eat chorizo you can make Spanish Lentil Soup, all you have to do is follow this recipe and remove the Spanish sausage.